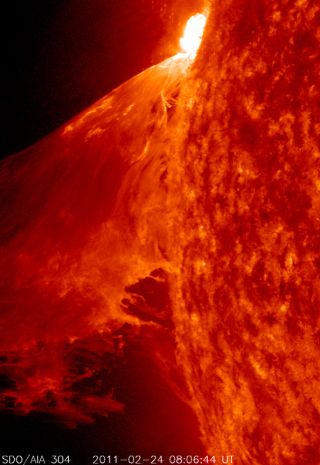 The sun unleashed a powerful flare Thursday (Feb.24) that – while not the strongest solar storm ever seen – let loose a massive wave of magnetic plasma in a dazzling display.

The solar flare kicked up a huge, twisting tendril of plasma that scientists call a solar prominence. NASA's Solar Dynamics Observatory recorded the flare in an eye-catching video, with mission scientists calling the eruption a "monster prominence."

"Some of the material blew out into space and other portions fell back to the surface," NASA scientists wrote in a statement released Friday (Feb. 25). [Amazing Sun Photos from Space]

Thursday's solar flare was the latest in a series of strong sun storms this month. Scientists classified it as an M3.6 Class solar storm. NASA described the solar eruption as a "rather large-sized flare."

Scientists use a three-class system to measure the strength and intensity of solar flares. The most powerful sun storms are Class X – a Class X2.2 solar flare erupted on Feb. 14. Class M solar storms are medium strength but still powerful, according to a NASA description. The weakest types of solar flares are Class C storms.

Thursday's solar flare erupted from a new spot on the sun called sunspot 1163, according to the website Spaceweather.com, which monitors space weather and skywatching events. The flare was not aimed at Earth, and so should not pose a concern to satellites or other systems.

"Earth was little affected," Spaceweather.com reported Friday. "Plasma clouds produced by the blast did not come our way."

The sun is in the midst of an active phase of its 11-year solar weather cycle. The current cycle is known as Solar Cycle 24.

Strong solar flares aimed at Earth can disrupt satellites and power grids, as well as pose a hazard to astronauts on spacecraft.  They can also spark dazzling shows of the northern lights, or aurora borealis.

The threat of solar flares to satellites and infrastructure has been gaining notice among decision makers lately. Last week, Jane Lubchenco – the chief of the National Oceanic and Atmospheric Administration – told a gathering of scientists that the United States must take steps to protect assets from potentially dangerous space weather events.

"This is not a matter of if, it's simply a matter of when and how big," Lubchenco said of the potential for a dangerous solar flare. "We have every reason to expect we're going to be seeing more space weather in the coming years, and it behooves us to be smart and be prepared."