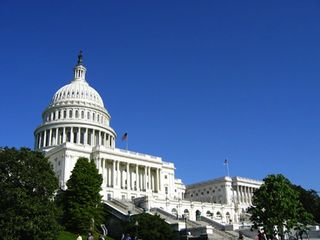 WASHINGTON — A group of Republicans in the U.S. House of Representatives is proposing to shift funds from NASA’s climate-change research coffers to the agency’s manned spaceflight program, an effort they say could preserve what they described as the agency’s core mission even as the new GOP-controlled House seeks to make good on vows to roll back federal discretionary spending this year.

“With your help, we can reorient NASA’s mission back toward human spaceflight by reducing funding for climate change research and reallocating those funds to NASA’s human spaceflight accounts, all while moving overall discretionary spending toward [fiscal 2008] levels,” states a Feb. 7 letter to Rep. Hal Rogers (R-Ky.), chairman of the House Appropriations Committee, and Rep. Frank Wolf (R-Va.), chairman of the panel’s commerce, justice, science subcommittee that oversees NASA spending.

In the letter, the lawmakers took issue with recent increases in climate-change spending, a goal that has topped President Barack Obama’s environmental policy agenda since he took office in January 2009.

Congress approved Obama’s $1.4 billion request for Earth science in the 2010 budget blueprint he sent lawmakers in May 2009, increasing the proposed funding line slightly to $1.42 billion. And though Congress has yet to approve an appropriations package for federal spending in 2011, leaving NASA and other federal agencies to operate in the current budget year at 2010 spending levels, House and Senate authorizers endorsed Obama’s $1.8 billion request for climate change and other Earth monitoring initiatives in the NASA Authorization Act of 2010, which was signed into law in October.

The authorization measure also endorses spending $3.8 billion for manned space exploration programs this year. But with Republican leaders in the House pushing to curtail federal discretionary spending, the letter urges Rogers and Wolf to ensure that NASA stays focused on space exploration.

“For years, Presidents and Congress have charged NASA with completing tasks that fall outside the scope of NASA’s primary mission,” the letter states. “Specifically, NASA spent over 7.5 percent — over a billion dollars — of its budget on studying global warming/climate change in Fiscal Year 2010.”

In addition, the letter states that excessive spending on climate-monitoring initiatives is not limited to NASA.

“Overall, the government spent over $8.7 billion across 16 Agencies and Departments throughout the federal government on these efforts in [fiscal 2010] alone,” the letter states. “Global warming funding presents an opportunity to reduce spending without unduly impacting NASA’s core human spaceflight mission.”

“We must not put ourselves in the position of watching Chinese astronauts planting their flag on the moon while we sit — earthbound by our own shortsightedness,” the letter states.