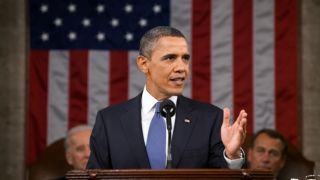 President Barack Obama today called on the country to push forward toward new space frontiers as he honored those Americans who have lost their lives in the pursuit of space exploration.

The president's remarks came on NASA's Day of Remembrance today (Jan. 27) to commemorate the loss of the crews of the Apollo 1 mission, the space shuttle Challenger, and the shuttle Columbia.

"We pause to reflect on the tragic loss of the Apollo 1 crew, those who boarded the space shuttle Challenger in search of a brighter future, and the brave souls who perished on the space shuttle Columbia," President Obama said in a statement. "Through triumph and tragedy, each of us has benefited from their courage and devotion, and we honor their memory by dedicating ourselves to a better tomorrow."

Today is the 44th anniversary of the Apollo 1 accident, when three astronauts were killed by a fire that broke out in their capsule during a ground test in 1967. It was NASA's first fatal space accident.

The 25th anniversary of the Challenger disaster is tomorrow (Jan. 28). Seven astronauts, including America's first "Teacher in Space" Christa McAuliffe, perished when the shuttle was destroyed shortly after liftoff. And Tuesday, Feb. 1, marks the eighth anniversary of the day seven astronauts died when the shuttle Columbia was destroyed during its return to Earth in 2003.

While Obama reflecting on the past in his statement, he also highlighted NASA's future, which includes a plan he put forward last year to send humans to an asteroid by 2025 and on to Mars in the 2030s.

"Today, on this Day of Remembrance when NASA reflects on the mighty sacrifices made to push those frontiers, America’s space agency is working to achieve even greater goals," he said. "NASA’s new 21st Century course will foster new industries that create jobs, pioneer technology innovation, and inspire a new generation of explorers through education – all while continuing its fundamental missions of exploring  our home planet and the cosmos."

President Obama also mentioned NASA during his recent State of the Union speech Jan. 25. He called the mission to combat the country's current challenges, including the economy, jobs, education and energy, to "the Apollo projects of our time."

President Obama also referenced Sputnik, the Soviet satellite that was the first man-made object to orbit Earth, and the competition it set off between the United States and the former Soviet Union.

"This is our generation's Sputnik moment," he said, referring to the challenges facing the country now. He called for Americans to step up their work in education, innovation and technology development just as they did during that space race.

NASA held a series of events at space centers across the country today mark its Day of Remembrance. Tomorrow, the Challenger crew will be honored during a ceremony at the Kennedy Space Center Visitor's Complex in Florida.

"The last week of January every year brings us the opportunity to reflect on the sobering realities of our space exploration enterprise. Each time men and women board a spacecraft, their actions carry great risk along with the opportunity for great discoveries and the chance to push the envelope of our human achievement," Bolden said in a statement. "Today, we honor the Apollo 1, Challenger and Columbia crews, as well as other members of the NASA family who lost their lives supporting NASA’s mission of exploration. We thank them and their families for their extraordinary sacrifices in the service of our nation."