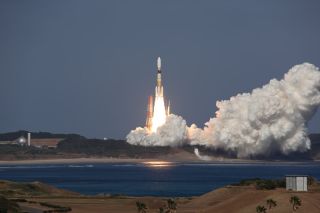 An unmanned Japanese cargo spaceship is closing in on the International Space Station, on track to link up with the orbiting lab Thursday (Jan. 27).

"The launch vehicle flew smoothly, and, at about 15 minutes and 13 seconds after liftoff, the separation of the Kounotori 2 was confirmed," officials from the Japanese Aerospace Exploration Agency (JAXA) said in a statement. ("Kounotori" is Japanese for "white stork.")

This is the second voyage for Japan's fledgling orbital spacecraft fleet. The first Kounotori cargo ship flew to the space station in September 2009.

Kounotori 2 is a gold cylinder about 33 feet (10 meters) long and 14 feet (4.4 m) wide, packed with 5.3 tons of supplies, including fresh food, for the orbiting lab. Some of this cargo will be unloaded inside the station, while other, larger pieces of spare hardware will be temporarily installed on the lab's exterior.

When Kounotori 2 arrives, astronauts inside the space station will use a robotic arm to latch onto the spacecraft and attach it to the Earth-facing port on the orbiting lab's Harmony module. [Graphic: The International Space Station, Inside and Out]

NASA plans to broadcast the operation live on NASA TV.

Japan's Kounotori freighters, officially known as H-2 Transfer Vehicles (HTVs), are part of a growing suite of internationally built unmanned cargo spaceships that help supply the International Space Station. After NASA's astronaut-carrying space shuttles retire this year, the robotic ships will play a vital role in stocking up the outpost for its live-in crews.

After about two months at the space station, Kounotori 2 will be filled with trash and sent back toward Earth, to be destroyed by the heat of re-entry.