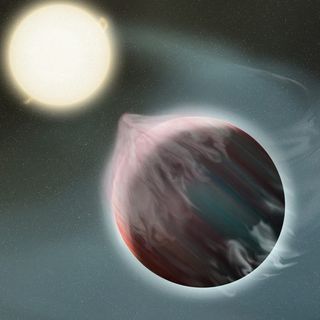 An artist's depiction of an early stage in the destruction of a "hot Jupiter" (a gas giant with a very close orbit) by its star.
(Image: © NASA/GSFC/Frank Reddy)

A huge, scorching-hot alien planet may be causing its parent star to inflate and deflate like a balloon, a new study suggests.

The star WASP-33 (also known as HD 15082) pulsates in two directions — radially, like a balloon, and non-radially, like the tides in Earth's oceans. These pulsations might be caused by the powerful gravity of the star's planet, WASP-33b — a phenomenon never seen before in a planetary system, researchers said.

WASP-33 is hotter than our sun, and about 50 percent more massive. It's found about 380 light-years away, in the constellation Andromeda. WASP-33b, the star's one known planet, was first detected in 2006 and confirmed in 2010.

WASP-33b is about four times as massive as Jupiter, and it's so close to its host star that it completes an orbit every 1.2 days. Because of this extreme proximity, WASP-33b is perhaps the hottest alien planet known, with surface temperatures reaching 5,780 degrees Fahrenheit (3,193 degrees Celsius), according to a recent study. [The Strangest Alien Planets]

The planet also transits — or crosses in front of — its host star as seen from our perspective on Earth.

In the current study, researchers used two different telescopes to study the star's pulsation patterns in detail. They found intriguing hints that the pulsations are tied to — and perhaps caused by — WASP-33b's motion around the star.

But more work will be needed to confirm this, and to get a firm handle on what's really going on, researchers said.

"In any case, gaining insight into the nature of WASP-33 will necessarily require the collection of additional data," the scientists, led by Enrique Herrero of the Universitat Autonoma de Barcelona, said in the study, which was published this month in the journal Astronomy & Astrophysics.

Since discovering the first planet beyond our solar system in 1992, astronomers have now found more than 500. Many of these alien worlds are so-called "hot Jupiters" like WASP-33b, but researchers are finding more and more smaller worlds, and more Earth-like worlds.

Kepler's main goal is to find Earth-like planets that might be able to support life as we know it. Kepler 10-b is too hot to qualify, but scientists are hopeful that future discoveries may turn up an alien Earth before too much longer.