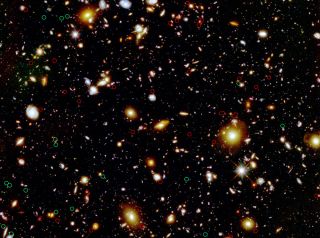 This color composite image of the Hubble Ultra Deep Field was created by the Hubble Space Telescope shows galaxies in green circles, some of which may be from when the universe was between 650-480 million years old. About 20-30 percent of these candidates are very close to foreground galaxies, which could affect their appearance via the gravitational lens effect.
(Image: © NASA, ESA, Z. Levay and A. Feild (STScI)Credit: NASA, ESA, S. Wyithe, R. Windhorst, and S. Mao. Acknowledgment: G. Illingworth and R. Bouwens and the HUDF09 Team.)

Cosmic lenses created by the ultra-strong gravity of some objects in space may spoil upcoming estimates of the number of galaxies during the universe's earliest days by as much as a factor of 10, a new study warns.

A great deal of mystery surrounds the days when stars were first born. To learn more about the first galaxies that formed, astronomers focus on the farthest ones they can see. If light from a galaxy took a long time coming to Earth, the galaxy must be very old as well as very distant.

After all, the universe is estimated to be 13.7 billion years old.

The problem that researchers now face has to do with the way gravity warps space-time. The greater the mass of an object in space, the stronger its gravitational pull. This in turn can bend light around it, affecting the view by telescopes on Earth.

Blame it on gravity

Scientists call this cosmic effect "gravitational lensing." When it is caused by galaxies that lie on the way toward the ancient ones scientists want to study, it can lead to distorted views of the targets' light.

The probability of gravitational lensing distorting measurements of distant galaxies had been estimated at just 0.5 percent.

However, the study found that astronomers failed to account for "magnification bias," which can make a galaxy appear brighter than it is.

"Gravitational lensing is magnifying all galaxies lying behind a gravitational lens, and this happens much more often for the most distant galaxies," said the study's lead author, Stuart Wyithe, an astronomer at the University of Melbourne in Australia.

When astronomers search for galaxies in a certain patch of space, they don't want their images to be flooded with unnecessary light, so their telescope limits the brightness that can be detected (making some galaxies too faint to be observed). However, because gravitational lensing magnifies the light from galaxies relative to their intrinsic brightness, intrinsically faint galaxies start popping up in the results.

"Since faint galaxies are much more common than bright galaxies, the number of sources observed behind gravitational lenses is significantly enhanced," Wyithe told SPACE.com.

At very large distances, magnification bias can increase the number of gravitationally lensed galaxies detected by as much as a factor of 10, according to Wyithe and his colleagues.

The implication is that our view of the most distant galaxies through the Hubble Space Telescope "might be distorted significantly by gravitational lensing, a kind of cosmic hall of mirrors," Wyithe said.

The next-generation James Webb Space Telescope will be required to properly investigate the lensing phenomenon. By looking for redshift — the distortion in light from an object as it moves away from an observer — one might be able to overcome this magnification bias "and measure an unbiased census of early galaxies," Wyithe said.

Knowing how many galaxies existed in the early universe is key to investigating enigmas such the so-called "reionization" of the early universe. This critical, but not yet fully understood, event occurred when the atomic hydrogen that once pervaded the universe was ionized into its constituent protons and electrons, increasing the temperature of the universe to some 18,000 degrees Fahrenheit (10,000 degrees Celsius).

Studies of the most distant, ancient galaxies suggest they did not put out enough radiation to reionize the early universe.

"This reionization occurred between about 400 million and 900 million years after the Big Bang, but astronomers still don't know which sources of light caused it to happen," Wyithe said. The new galaxy candidates now being seen in the Hubble Ultra Deep Field come from right in this important epoch in the evolution of the universe, and could thus help solve the mystery.

The scientists detail their findings in the Jan. 13 issue of the journal Nature.