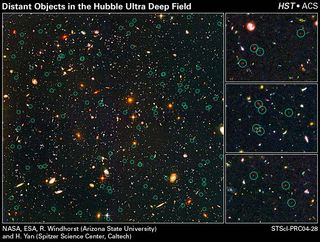 This image shows primordial dwarf galaxy candidates circled in green. Three enlargements at right show several dwarf objects that are at the limits of Hubble's present instrument capabilities. The Hubble UDF is a small region of sky in the direction of the southern constellation Fornax. The faintest objects are less than one four-billionth the brightness of stars that can be seen with the naked eye.
(Image: © NASA, ESA, R. Windhorst (Arizona State University) and H. Yan (Spitzer Science Center, Caltech))

Astronomers have found what they believe to be several of the earliest star-forming galaxies, in a detailed analysis of Hubble Space Telescope images released earlier this year.

The new examination of the Hubble Ultra Deep Field (UDF) imagery was done by five separate teams, working since the data was revealed to the public in March. The effort involves close scrutiny of blurry dots of distant light amid a zoo of galaxy shapes, many of which are slightly closer in space and more modern in time.

Researchers are looking for the first galaxies, whose radiation burned off a cosmic fog that enveloped the universe just after the Big Bang, according to theory.

Astronomers billed their findings, released Thursday, as a possible glimpse of the "end of the opening act" of galaxy formation.

The light from the young galaxies left them when the universe was just 5 percent of its present age, which is now approximately 13.7 billion years.

After the Big Bang, theorists say, the universe was hotter than the Sun. There were no stars, but rather a searing soup of hydrogen nuclei, and electrons that raced around on their own. As space expanded, the universe cooled, allowing the hydrogen nuclei to capture electrons, making what is called neutral hydrogen.

The universe was opaque, blocking the release of light like morning fog.

The first stars were incredibly massive, containing perhaps 200 times more material than the Sun, but they will perhaps never be seen because they were born amid this cosmic fog. In time, intense ultraviolet radiation from these stars stripped interstellar hydrogen of electrons. This reionization period, as it is called, lifted the fog, literally allowing light to travel through the growing cosmos.

The reionization epoch ended somewhere between 500 million and 1 billion years after the Big Bang.

Galaxies that developed during that time are so far away -- because everything in the universe has been expanding away from everything else ever since -- that they are difficult to detect.

The UDF images combined visible-light and infrared observations from Hubble. The result reveals that roughly a billion years after the Big Bang, the universe was already loaded with dwarf galaxies. Larger galaxies like our Milky Way had not yet formed (theorists think such mature galaxies evolved out of mergers of the smaller ones).

The UDF contains somewhere between 54 and 108 of the most primordial known dwarf galaxies, all seen as dim red smudges.

The new investigation suggests galaxy formation began sometime prior to a billion years after the birth of the universe, but the five research teams don't agree on any specific timeline. A couple of intriguing new findings emerged, however.

When the UDF field iss compared to a broader and less sensitive survey of galaxies done by the Cerro Tololo Inter-American Observatory, there appears to be a concentration of the dwarf galaxies that spreads from one corner of the UDF field into the surrounding space.

Galaxy concentrations are expected, and they've been seen in the more modern universe. Finding one so early on means the more intense radiation from a tight collection of primordial galaxies would probably have caused more rapid reionization there than in surrounding areas with fewer galaxies.

"It is then likely that reionization proceeded at different speeds in different regions of the early universe," said James Rhoads of the Space Telescope Science Institute, which operates Hubble for NASA.

Another team looked at how fast stars were born and found it to be lower than expected.

"At early times, the universe seems to undergo a rapid heating," explained Andrew Bunker of the University of Cambridge. "The main candidate for what caused this is ultraviolet radiation, which can be generated as stars are born.

"Our results suggest this was not the case, the small number of star forming galaxies found in the Ultra Deep Field may not be sufficient to do this. Perhaps this heating happened further back in time, closer to the Big Bang."

The lengthy observations needed to capture the scant number of photons coming from the nascent galaxies stretched Hubble to the limit of its abilities. Researchers said the next step in exploring the first epoch of galaxy formation will require upgrades to Hubble or the launch of a planned successor, the James Webb Space Telescope.

"For the first time, we at last have real data to address this final frontier -- but we need more observations," said Richard Ellis of the California Institute of Technology in Pasadena, Calif.