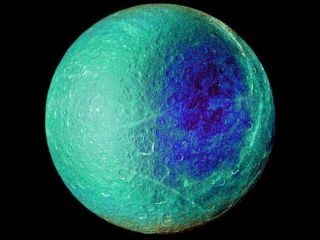 A false-color view of Saturn's moon Rhea captured by NASA's Cassini spacecraft on March 2, 2010. This image shows the side of the moon that always faces the planet. Ultraviolet, green and infrared images were combined into a single picture that isolates and maps regional color differences. This "color map" was then superimposed over a clear-filter image that preserves the relative brightness across the body.
(Image: © NASA/JPL/SSI)

A mosaic of the

The new images have

And the mapping work