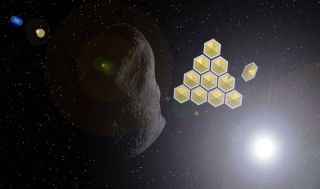 An illustration of how solar sails might help deflect the asteroid Apophis.
(Image: © Olivier Boisard)

A flotillaof solar sail spacecraft could change the course of the asteroid Apophis —which is headed a little too close to Earth for comfort — by shading the spacerock from solar radiation, according to a French researcher.

Such a plancould help shift Apophis into a slightly safer orbit by the time it is expectedto swing by Earth on April 13, 2036. But experts have warned previously thatany efforts to divert the spacerock could actually make matters worse.

Thepreliminary concept idea was proposed at a symposium on solar sails ? which arespacecraft powered by sunlight pushing against a sail ? a few months ago at theNew York City College of Technology in Brooklyn.

"Apophisis a nice target for launching this kind of mission for 20 years from now; nottoo far, not too close," said Jean-Yves Prado, an engineer at the NationalCenter for Space Study (CNES) in France.

How tomove a space rock

That effectoccurs when the sun warms an asteroid more on the sun-facing side than the farside. The rock then emits more thermal radiation on its near side, whichcreates a bit of thrust and changes its momentum slightly.

But forApophis, which falls just in the middle of that mass range, the effect couldmake a difference.

Oncedeployed, the solar sails would hover a few kilometers above the space rock andfly in formation according to master control by the transfer module, without adirect link between Earth and the individual sails.

The modulecould also position itself as a small gravity tractor to provide a smallgravitational push on Apophis, Prado suggested.

Launchwindows would become available for such a mission to launch aboard a RussianSoyuz-Fregat rocket in 2016 and 2019, Prado said. He added that a secondredundant mission could also launch to ensure success.

Severalother solar sail researchers at the symposium raised questions about themission design. One questioned the need for a chemical propulsion system oneach solar sail that would balance out the solar pressure and keep the sailsflying in their proper place.

Pradoreplied that his group had examined the possibility of using solar electricpropulsion to also maintain low thrust and keep the solar sails in place, buthad ruled it out based on cost.

Anotherresearcher suggested that simply crashing four spacecraft with the mass of thesolar sails into Apophis might be simpler.

An earlier,unrelated Russian proposal to nudge thespace rock aside has been met with skepticism, in part because any solutionmight worsen Earth's chances, given the uncertainty regarding Apophis' exacttrajectory.

Theasteroid's second near pass by Earth comes in 2068, when it has athree-in-a-million chance (or about 1-in-333,000) of impacting on the planet.

Whether ornot solar sails prove instrumental in protecting Earth from asteroids,proponents of the technology are excited about the progress they've made.

In July2010, Japan'sIkaros spacecraft became the first vehicle to have deployed a solar sailand successfully rode the sunlight in deep space. Another effort by Britaincalled CubeSail, slated to launch next year, will use a solarsail as an atmospheric brake and will possibly be used to take down piecesof space junk.