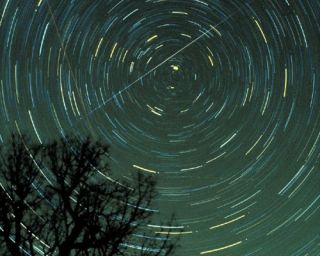 Star trails and a Geminids meteor over Georgia in 1985. Credit and copyright: Jimmy Westlake [Full Story]

What promises to be the best meteor shower of the year is hitting its peak just in time for the holidays, but skywatchers should act fast: This skyshow peaks overnight tonight.

At the heart of the skywatching spectacle is the Geminidmeteor shower, an annual mid-December rain of meteors that will reach itsheight tonight (Dec. 13) and early tomorrow morning. Skywatchers with good weather and clear skies could see up to 120 meteors an hour during the meteor shower's peak.

This sky mapshows where to look to see the Geminid meteor shower during peak hours on Dec.13 and Dec. 14. The meteors will appear to emanate from a spot in the sky nearthe bright star Castor in the constellation Gemini (the Twins), which gave theshower its name.

The Geminids are one of the most reliable displays of"shootingstars" of every year, and 2010's display is not expected todisappoint. The Geminids should be clearly visible to skywatchers in NorthAmerica by late tonight, but viewing conditions will improve dramatically oncethe moon sets at around 12:30 a.m. local time tomorrow morning.

The besttime to watch for Gemind meteors will be at 6 a.m. EST (1100 GMT), when theshower is expected to be at its most active.

Since theGemind meteor shower occurs in the winter for North American skywatchers, thereare some handy tips to remember before venturing outside into the chillyDecember night.

"At this time of year, meteor watching can be a long,cold business," advises SPACE.com's skywatching columnist Joe Rao."You wait and you wait for meteors to appear. When they don't appear rightaway, and if you're cold and uncomfortable, you're not going to be looking formeteors for very long. Therefore, make sure you're warm and comfortable."

Rao has saidthe Geminids are "usually the most satisfying of all the annual showers. Theycan even surpass the famous Perseid meteors of Augustat their peak."

The editorsof the skywatching magazine StarDate at the McDonald Observatory in Texas alsowarn skywatchers to get away from city lights if they want to get the best viewof the meteor shower.

"Look for state or city parks or other safe, darksites. Lie on a blanket or reclining chair to get a full-sky view,"StarDate magazine advised in a statement. "If you can see all of the starsin the Little Dipper, you have good dark-adapted vision."

Meteor showers occur when the Earth passes through thedebris trail left by a passing comet or asteroid. As the Earth crosses these trails,the leftover dust and rocks hit the planet's atmosphere and burns up in a fierymeteor. In space, these objects are known as meteoroids. They are known asmeteors when they burn up in Earth's atmosphere. Any meteors that reach theground are called meteorites.

The Geminid meteor shower was first identified in the1860s but it wasn't until 1983 when a NASA satellite rocky asteroid 3200Phaethon as the source of shooting star display.

"When the Geminids first appeared in the late 19thcentury, shortly before the U.S. Civil War, the shower was weak and attractedlittle attention," NASA officials said in a statement. "There was nohint that it would ever become a major display."

Now the meteor shower is eagerly anticipated to dazzleskywatchers every year.

But the asteroid3200 Phaethon still poses a mystery to astronomers because it does notappear to create enough debris to account for the spectacular displays createdby the Geminid meteor shower each year, NASA scientists have said.

"The Geminids are my favorite, because they defyexplanation," said NASA astronomer Bill Cooke, a meteor expert at theagency's Marshall Space Flight Center in Huntsville, Ala, in a statement.

NASA will hold a web chat to discuss the Geminids todayat 3 p.m. EST (2000 GMT), then turn the night over to Cooke at 11 p.m. EST(0400 Dec. 14) for a six-hour Geminids observing campaign. During that time,Cooke will be on hand to answer questions via web chat on how the 2010 Geminidmeteor display appears.

NASA's Geminids event will include two webchats and a live video and audio feed from an all-sky camera recording themeteor shower at the event's website:http://www.nasa.gov/connect/chat/geminids2010.html