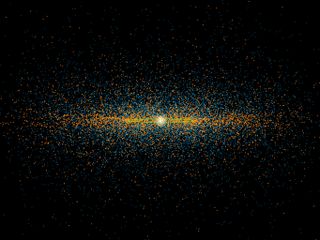 A visualization of some of the near-Earth asteroids tracked by NASA.
(Image: © NASA/JPL-Caltech)

It's always nice to see old friends, and NASA's asteroid-monitoring team has a busy schedule this weekend (Sept. 13 and 14) doing just that.

"These asteroids have been well observed," Lindley Johnson, planetary defense officer at NASA, said in a statement. "Both of these asteroids are passing at about 14 lunar distances from the Earth, or about 3.5 million miles away, but small asteroids pass by Earth this close all the time."

2010 CO1, which is between 400 feet and 850 feet across (120 to 260 meters) is a relatively frequent visitor and last made a close approach last fall, skimming past Earth on Sept. 11. And we'll see it again next year, on Sept. 16. Annual visits will continue until 2023, after which the asteroid will stay farther away from Earth until 2061.

Both of these asteroids are in or near NASA's medium category of asteroids, which begins at rocks at least 460 feet (140 m) across — large enough that if one hit, it could have catastrophic local consequences. NASA's large category begins at 0.6 miles (1 kilometer) across, substantial enough that if an impact occurred it could have global consequences.

NASA and other space agencies identify and track asteroids so that, if one does turn out to be on a collision course with Earth, humans could have enough warning to potentially do something about it. But for these two asteroids, that isn't a problem — scientists already have enough information about their orbits to know that they'll pass right on by.