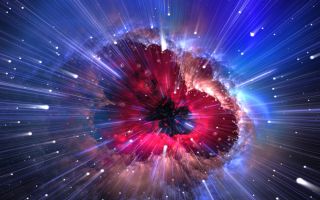 In 1925, Einstein went on a walk with a young student named Esther Salaman. As they wandered, he shared his core guiding intellectual principle: "I want to know how God created this world. I'm not interested in this or that phenomenon, in the spectrum of this or that element. I want to know His thoughts; the rest are just details."

The phrase "God's thoughts" is a delightfully apt metaphor for the ultimate goal of modern physics, which is to develop a perfect understanding of the laws of nature — what physicists call "a theory of everything," or TOE. Ideally, a TOE would answer all questions, leaving nothing unanswered. Why is the sky blue? Covered. Why does gravity exist? That's covered, too. Stated in a more scientific way, a TOE would ideally explain all phenomena with a single theory, a single building block and a single force. In my opinion, finding a TOE could take hundreds, or even thousands, of years. To understand why, let's take stock. [The 18 Biggest Unsolved Mysteries in Physics]

We know of two theories that, when taken together, give a good description of the world around us, but both are light-years from being a TOE.

The first is Einstein's theory of general relativity, which describes gravity and the behavior of stars, galaxies and the universe on the largest scales. Einstein described gravity as the literal bending of space and time. This idea has been validated many times, most notably with the discovery of gravitational waves in 2016.

The second theory is called the Standard Model, which describes the subatomic world. It is in this domain that scientists have made the most obvious progress toward a theory of everything.

If we look at the world around us — the world of stars and galaxies, poodles and pizza, we can ask why things have the properties they do. We know everything is made up of atoms, and those atoms are made up of protons, neutrons and electrons.

And, in the 1960s, researchers discovered that the protons and neutrons were made of even smaller particles called quarks and the electron was a member of the class of particles called leptons.

Finding the smallest building blocks is only the first step in devising a theory of everything. The next step is understanding the forces that govern how the building blocks interact. Scientists know of four fundamental forces, three of which — electromagnetism, and the strong and weak nuclear forces — are understood at the subatomic level. Electromagnetism holds atoms together and is responsible for chemistry. The strong force holds together the nucleus of atoms and keeps quarks inside protons and neutrons. The weak force is responsible for some types of nuclear decay.

Each of the known subatomic forces has an associated particle or particles that carry that force: The gluon carries the strong force, the photon governs electromagnetism, and the W and Z bosons control the weak force. There is also a ghostly energy field, called the Higgs field, that permeates the universe and gives mass to quarks, leptons and some of the force-carrying particles. Taken together, these building blocks and forces make up the Standard Model. [Strange Quarks and Muons, Oh My! Nature’s Tiniest Particles Dissected]

Using quarks and leptons and the known force-carrying particles, one can build atoms, molecules, people, planets and, indeed, all of the known matter of the universe. This is undoubtedly a tremendous achievement and a good approximation of a theory of everything.

And yet it really isn't. The goal is to find a single building block and a single force that could explain the matter and motion of the universe. The Standard Model has 12 particles (six quarks and six leptons) and four forces (electromagnetism, gravity, and the strong and weak nuclear forces). Furthermore, there is no known quantum theory of gravity (meaning our current definition covers just gravity involving things larger than, for example, common dust), so gravity isn't even part of the Standard Model at all. So, physicists continue to look for an even more fundamental and underlying theory. To do that they need to reduce the number of both building blocks and forces.

Finding a smaller building block will be difficult, because that requires a more powerful particle accelerator than humans have ever built. The time horizon for a new accelerator facility coming on line is several decades and that facility will provide only a relatively modest incremental improvement over existing capabilities. So, scientists must instead speculate on what a smaller building block might look like. A popular idea is called superstring theory, which postulates that the smallest building block isn't a particle, but rather a small and vibrating "string." In the same way a cello string can play more than one note, the different patterns of vibrations are the different quarks and leptons. In this way, a single type of string could be the ultimate building block. [Top 5 Reasons We May Live in a Multiverse]

The problem is that there is no empirical evidence that superstrings actually exist. Further, the expected energy required to see them is called the Planck energy, which is a quadrillion (10 raised to the 15th power) times higher than we can currently generate. The very large Planck energy is intimately connected to what's known as the Planck length, an unfathomably tiny length beyond which quantum effects become so large that it is literally impossible to measure anything smaller. Meanwhile, go smaller than the Planck length (or bigger than the Planck energy), and the quantum effects of gravity between photons, or light particles, become important and relativity no longer works. That makes it likely this is the scale at which quantum gravity will be understood. This is, of course, all very speculative, but it reflects our current best prediction. And, if true, superstrings will have to remain speculative for the foreseeable future.

The plethora of forces is also a problem. Scientists hope to "unify" the forces, showing that they are just different manifestations of a single force. (Sir Isaac Newton did just that when he showed the force that made things fall on Earth and the force that governed the motion of the heavens were one and the same; James Clerk Maxwell showed that electricity and magnetism were really different behaviors of a unified force called electromagnetism.)

In the 1960s, scientists were able to show that the weak nuclear force and electromagnetism were actually two different facets of a combined force called the electroweak force. Now, researchers hope that the electroweak force and the strong force can be unified into what is called a grand unified force. Then, they hope that the grand unified force can be unified with gravity to make a theory of everything.

However, physicists suspect this final unification would also take place at the Planck energy, again because this is the energy and size at which quantum effects can no longer be ignored in relativity theory. And, as we've seen, this is a much higher energy than we can hope to achieve inside a particle accelerator any time soon. To give a sense of the chasm between current theories and a theory of everything, if we represented the energies of particles we can detect as the width of a cell membrane, the Planck energy is the size of Earth. While it is conceivable that someone with a thorough understanding of cell membranes might predict other structures within a cell — things like DNA and mitochondria — it is inconceivable that they could accurately predict the Earth. How likely is it that they could predict volcanoes, oceans or Earth's magnetic field?

The simple fact is that with such a large gap between currently achievable energy in particle accelerators and the Planck energy, correctly devising a theory of everything seems improbable.

That doesn't mean physicists should all retire and take up landscape painting — there is still meaningful work to be done. We still need to understand unexplained phenomena such as dark matter and dark energy, which make up 95% of the known universe, and use that understanding to create a newer, more comprehensive theory of physics. This newer theory will not be a TOE, but will be incrementally better than the current theoretical framework. We will have to repeat that process over and over again.

Disappointed? So am I. After all, I've devoted my life to trying to uncover some of the secrets of the cosmos, but perhaps some perspective is in order. The first unification of forces was accomplished in the 1670s with Newton's theory of universal gravity. The second was in the 1870s with Maxwell's theory of electromagnetism. The electroweak unification was relatively recent, only half a century ago.

Given that 350 years has elapsed since our first big successful step in this journey, perhaps it's less surprising that the path ahead of us is longer still. The notion that a genius will have an insight that results in a fully developed theory of everything in the next few years is a myth. We're in for a long slog — and even the grandchildren of today's scientists won't see the end of it.

But what a journey it will be.

Don Lincoln is a physics researcher at Fermilab. He is the author of "The Large Hadron Collider: The Extraordinary Story of the Higgs Boson and Other Stuff That Will Blow Your Mind" (Johns Hopkins University Press, 2014), and he produces a series of science education videos. Follow him on Facebook. The opinions expressed in this commentary are his.