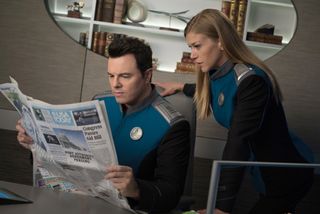 The crew of "The Orville" get a glimpse at life in 2015 in the episode "Lasting Impressions."
(Image: © Kevin Estrada/Fox)

After all the excitement and guessing games going on with "Star Trek: Discovery," it's nice to slow things down a bit. No alternative timelines, AIs hell-bent on extinguishing all life or mysterious angelic entities here, thank goodness, just a simple, satisfying sci-fi show.

One thing that hasn't done "The Orville" any favors this season is the running order of episodes. We've had a couple of episodes that focus on Lt. Cmdr. Bortus (Peter Macon) close together and now, after the very first — and very welcome — episode that focused on Lt. Gordon Malloy (Scott Grimes) we get another stand-alone one, straight afterward. We wait for 22 episodes for one, then two come along at once. This will need to be addressed for Season 3.

Related: Inside That Spectacular Space Battle in 'The Orville'

In this episode, entitled "Lasting Impressions," a time capsule is retrieved from 2015 — 400 years before the events of "The Orville" — and the contents examined. Yet another "Star Trek" alum makes an appearance: this time it's Tim Russ as Dr. Sherman, the scientist who studies the time capsule. Russ played the Vulcan Tuvok on "Star Trek: Voyager."

As the camera pans over contents that are laid across a table, we get to see which brands paid for a product-placement opportunity in "The Orville," including Coca-Cola, Apple and Snickers. There's also a pack of cigarettes on the table, but they seem to have no packaging at all. Not even a fictional one.

These cigarettes attract the attention of Bortus, who finds the smell of tobacco "very interesting." Clearly the time capsule was hermetically sealed.

There's an iPhone on the table, too, and Sherman explains that so far they've been unable to access the information stored on it. Lt. Cmdr. John LaMarr (J. Lee) offers to have a go and — with the help of Lt. Yaphit (voiced by Norm MacDonald) and some switch-it-off-and-on-again humor — is successful. They find a video file of the phone's owner, an attractive young woman named Laura Huggins (Leighton Meester), and straightaway Malloy is smitten.

What follows is a beautiful episode, not totally dissimilar to the "Star Trek: The Next Generation" episode "Booby Trap" (S03, E06). It's an emotional journey that's well-paced, well-written and has subtle humor in the right places.

The engineering team scrolls through thousands of text messages, marveling over the antique device and even how different the language was 400 years ago.

"Look at this," says Sherman, pointing at the handset. "She's clearly asking her friend where to find the nearest repair service for her device, but instead of writing 'wireless telecommunications facility,' she just wrote 'WTF.'"

In the only subplot of this episode, Bortus has now programmed his replicator to create a cigarette, and he shows it to his partner, Klyden (Chad L. Coleman), who also finds the aroma "most pleasing." Naturally, they try eating it first, but after replicating another one and lighting it, they quickly begin to enjoy the experience … and then they replicate 500 more.

Malloy, meanwhile, takes the iPhone down to the holosuite and with convenient ease manages to download all the information to the ship's computer and construct a simulation based on it. After activating the program, he finds himself in Laura's apartment while a party is in full swing. It turns out that she's just broken up with her long-term boyfriend and moved into a new place.

He meets some of her friends and begins chatting with Laura herself. The dialogue here is spot on; it's not forced at all, sounds totally natural and quickly we're caught up with Malloy's obvious feelings for her, largely because Grimes is an incredibly talented, albeit underused, actor.

This is far from the incredible action we saw a few episodes ago in the two-part episode "Identity" and it shows the range of what "The Orville" offers. Here's the thing: early on, we suspect most viewers — us included — tried to compartmentalize the show in our minds. It frequently jumps from serious drama to sidesplitting comedy, often within the same episode and sometimes when you least expect it. Sometimes the changing material felt jarring and perhaps out of place, but that's exactly what "The Orville" is: It's a whole bunch of different stuff whenever it wants to be. And realizing that makes it much easier to enjoy.

Malloy tries to share the excitement of his experiences on the holosuite simulation with LaMarr, but his friend suggests he keep everything in perspective, reminding Malloy that Laura has been dead for nearly four centuries.

This episode doesn't specifically refer to it, but it is another example of holosuite addiction, much like we saw in the episode "Primal Urges" (S02, E02). Imagine being able to do anything — quite literally anything — on one of these simulators. Walk on the moon with Neil Armstrong, have sex with anyone or anything, fight the Nazis on the beaches of Normandy with no danger of getting hurt, solve crimes like a pulp-novel detective, be a superhero, star on Broadway … the only limits would be your own imagination.

Bortus, meanwhile, is smoking everywhere on the ship, including while he's on duty on the bridge. Capt. Ed Mercer (Seth MacFarlane) and Cmdr. Kelly Grayson (Adrianne Palicki) promise Lt. Talla Keyali (Jessica Szohr) they'll have a word with him.

Back in the holosuite, Malloy goes to see Laura play with her band in a bar. We've spoken before about the musical choices MacFarlane makes, and despite this scene having a live, acoustic accompaniment as Laura plays, instead of an orchestral incidental score, the music is still used to great effect. The look in Malloy's eyes as he watches says everything; he's falling in love with her. And you'll be reaching for the tissue box very soon, if you haven't already.

She gives him her number, which quite entertainingly results in Malloy having to replicate an iPhone, which he carries around with him even when he's out of the holosuite. The simulation of Laura is still running, in real time, within the Orville's computer, and they text each other throughout the day, resulting in some entertaining annoying-phone-user comedy.

Mercer and Grayson pay a visit to see Bortus and Klyden and find their quarters filled with smoke and the two of them happily puffing away. A visit to see Dr. Claire Finn (Penny Johnson Jerald) reveals that the Moclan physiology is particularly susceptible to nicotine and they have to start a program to quit smoking, while she works on a cure. If you've ever been in this position, you'll know that the observational humor that follows is well-observed and really rather funny.

Malloy persuades Mercer, Grayson and LaMarr to accompany him to a get-together at Laura's apartment, since she had been inquiring about his friends. The resulting attempt at Pictionary is possibly a nod to "When Harry Met Sally," and either way it proves just as entertaining as the similar scene in that epic '80s movie. Malloy ends up spending the night with Laura in her apartment. Thank goodness not one other member of the crew had booked the holosuite during that time. Also, in the first-season episode "Firestorm" (S01, E10), didn't we see that the Orville holosuite had a viewing platform? That could be a bit creepy.

Related: The 'Star Trek' Holodeck: From Science Fiction to a New Reality

Mercer, Grayson, LaMarr and Keyali are all beginning to express concern that Malloy is getting so wrapped up with a hologram. He pays an impromptu visit to Laura's apartment and finds her with her ex-boyfriend, Greg (Darri Ingolfsson). Since the simulation is running based on all the data in her iPhone, this evidently happened to her in real life. It seems they've decided to make another go of it, and, naturally, Malloy is devastated.

He decides to remove the ex-boyfriend algorithm from the program and re-enters the simulation. Malloy finds Laura is…a different person. She doesn't play or sing in a band and she's much more driven with her career at a department store. Her life without ever encountering the long-term ex-boyfriend is very different; it turns out that he was the one who actually encouraged her to join the band. She's no longer the person that Malloy had fallen in love with.

Grayson pays a visit to Malloy in his quarters to offer a few words of advice based on her own experiences, in particular with Mercer. This scene has another layer to it since Grimes and Palicki have become engaged in real life. It's nice that the sexual tension between Grayson and Mercer is currently nonexistent; instead MacFarlane has focused the large majority of this season, so far, on other characters, which is great.

To wrap things up, we get to see Bortus and Klyden losing all self-control and having a food fight in their quarters just as Finn arrives with an inoculation that will cure them of their nicotine addiction, and Malloy returns to the section of the holosuite program where Laura is singing. He joins her on the stage and they sing one song together, then rejoin Greg, who's back together with her. Malloy says how lucky he is and says goodbye, saying he's got a big job promotion that will take him out of town.

It's a simple, back-to-basics episode that's well-balanced, well-paced and well-written. When MacFarlane's at his best, "The Orville" excels, and this episode was directed by Kelly Cronin, who herself has an impressive list of projects including "Super Troopers 2," "Surrogates" and "The Orville" Season 1 episode "New Dimensions" (S01, E11).

For some bizarre reason, "The Orville" is off the air for the next three weeks in the U.S. and returns with the final three episodes of this season beginning April 11. We're hoping it's because maybe the last two episodes need extensive post-production work, therefore they have amazing VFX? An end-of-season cliffhanger perhaps? Sadly, we don't know … and we have a while to wait before we find out.

Season 2 of "The Orville" is on Thursdays at 9 p.m. ET on Fox in the U.S. It can be watched on demand on Fox Now and Hulu. It's also available on Fox.com in the U.S. In the U.K., it's on Thursdays at 9 p.m. GMT on Fox. The first season of "The Orville" is available to buy on DVD and a season pass can also be purchased from Amazon.