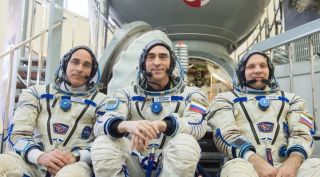 With the next Soyuz mission preparing to launch to the International Space Station, the crew has passed its final exams. But, while NASA's space station manager has made assurances that an earlier swap of the two Russian cosmonauts on the crew should pose no issues, concerns surrounding coronavirus will likely alter the mission's standard preflight quarantine.

In February, Russian cosmonauts Nikolai Tikhonov and Andrei Babkin, who were originally slated to launch on this mission alongside U.S. astronaut Chris Cassidy, were replaced by cosmonauts Anatoly Ivanishin and Ivan Vagner. The reason for the swap was left relatively vague, but it's known that the two cosmonauts were swapped for medical reasons. The new trio is set to launch on the Soyuz MS-16 on April 9.

Kirk Shireman, the space station's program manager at NASA, told SpaceNews that he didn't expect the swap to cause any major issues with the mission. "For a while, Chris Cassidy was training with Ivanishin and Vagner, so he knows them really well," Shireman said. "Sometimes, changing the crew a month out is disruptive, but in this case, they know each other pretty well."

Related: Coronavirus in the U.S.; Map, case counts and news
More: NASA monitors coronavirus for impacts to US space program

Additionally, despite the swap, Shireman told SpaceNews that the new crew has received similar training, "so, we're in good shape," he said. "We expect everything to go smoothly." He added that Roscosmos is not concerned with issues pertaining to the swap either.

Since the early days of NASA's Apollo project, a few outlier issues with astronauts getting colds and other mild illnesses in space led the agency to implement a two-week, preflight quarantine. This was done to ensure that astronauts are not exposed to any bugs that could interfere with their health once they arrive in space.

With current concerns across the globe surrounding the spread of coronavirus, which has been labeled a pandemic, Russian officials had suggested that this preflight quarantine might be extended and start earlier. Shireman confirmed to SpaceNews that the agency was discussing further steps and options, though details on exactly what this might entail and how early the quarantine will start have yet to be revealed.

"We expect them to take additional measures to make sure that quarantine is a little tighter," Shireman said. "We're ready to deal with that if it happens."