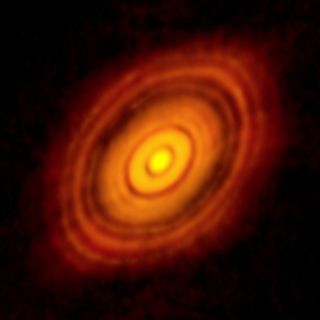 An ALMA image of the young star HL Tau and the disk of gas and dust surrounding it. Rings in such protoplanetary disks indicate regions of pressure maxima, which could establish boundaries that help shape the developing planetary system.
(Image: © ALMA (NRAO/ESO/NAOJ); C. Brogan, B. Saxton (NRAO/AUI/NSF))

One of our solar system's fundamental boundaries may have existed since the very beginning, a new study reports.

That demarcation, which lies just beyond Jupiter's orbit, is a dramatic one. The planets, asteroids and other objects sunward from the invisible line are lacking in carbon-containing organic compounds, whereas the stuff farther out is rich in organics.

Jupiter's hefty gravitational presence has been widely invoked to explain this "Great Divide." But computer simulations indicate that the gas giant was never big enough early in its history to keep the carbon-rich rocks and pebbles from spiraling into the inner solar system with the observed effectiveness, the new study found.

Related: How Did the Solar System Form?

"We banged our head against the wall," lead author Ramon Brasser, a researcher at the Earth-Life Science Institute, Tokyo Institute of Technology, Japan, said in a statement. "If Jupiter wasn't the agent responsible for creating and maintaining that compositional dichotomy, what else could be?"

Brasser and co-author Stephen Mojzsis, a professor of geological sciences at the University of Colorado Boulder, found inspiration, and a possible solution, in newly forming exoplanetary systems.

Images captured by the Atacama Large Millimeter/submillimeter Array (ALMA) in Chile have revealed intricate ring structures in the disks of dust and gas that surround newborn stars. The material in these disks is what planets are made of — and those rings serve as a sort of blueprint for the future planetary system, Brasser and Mojzsis determined.

A ring indicates that there is a band of maximum pressure in the protoplanetary disk, according to the two researchers. And such pressure peaks could explain our solar system's Great Divide.

"One or multiple such — potentially mobile — long-lived pressure maxima almost completely prevented pebbles from the Jovian region [from] reaching the terrestrial zone, maintaining a compositional partition between the two regions," the researchers wrote in the new study, which was published online today (Jan. 13) in the journal Nature Astronomy.

"We thus suggest that our young solar system's protoplanetary disk developed at least one and probably multiple rings, which potentially triggered the formation of the giant planets," they added.

The "almost" in the above statement is an important qualifier, however. Dribs and drabs of material from the outer system did sneak through the pressure net long ago, and some of it rained down on the young Earth, luckily for us.

“Those materials that might go to the Earth would be those volatile, carbon-rich materials," Mojzsis said in the same statement. “And that gives you water. It gives you organics."