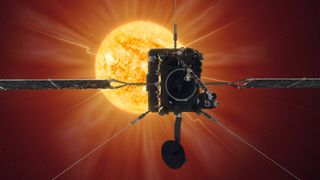 Solar Orbiter, a joint mission by NASA and the European Space Agency, has hit its first big milestone of its sun-watching mission — and the spacecraft will soon have pictures to prove it.

The probe is designed to give scientists a view of our sun unlike any they've ever seen before. That's because Solar Orbiter carries technology to gather images of our star, and its trajectory will allow it to study the poles of the sun, which never align toward Earth. And the science starts now, with the spacecraft executing its first flyby of the sun, or perihelion, today (June 15). The orbital maneuver brought the probe to about half the distance between the Earth and the sun, or about 48 million miles (77 million kilometers).

"We have never taken pictures of the sun from a closer distance than this," Daniel Müller, ESA's Solar Orbiter project scientist, said in a statement.

Related: Our sun will never look the same thanks to 2 probes & a giant telescope

According to the statement, the spacecraft's first imaging campaign will occur in the week following this close approach, or perihelion. It will take the spacecraft another week to beam those images back to Earth given its current distance from home, and the mission team expects to publish the resulting images in mid-July.

(NASA's Parker Solar Probe is already flying several times closer to the sun than Solar Orbiter is, but that spacecraft is not equipped to photograph the sun; instead it observes its immediate surroundings.)

Solar Orbiter launched in February and carries a total of 10 instruments: six telescopes and four instruments designed to study the spacecraft's immediate surroundings. Mission team members have been powering up and checking each instrument since shortly after the spacecraft's launch, but this week's data-gathering will be a new test for the probe.

"For the first time, we will be able to put together the images from all our telescopes and see how they take complementary data of the various parts of the sun, including the surface, the outer atmosphere, or corona, and the wider heliosphere around it," Müller said.