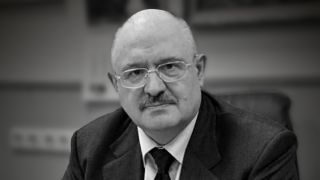 Yevgeny Mikrin, the head of Russia's human spaceflight program, has died, the country's space agency Roscosmos confirmed Tuesday (May 5). The statement did not specify a cause of death. Mikrin, who was in his mid-60s, tested positive for the new coronavirus last month.

Before his diagnosis, Mikrin had attended the April 9 launch of a Soyuz spacecraft carrying a NASA astronaut and two Russian cosmonauts to the International Space Station. On April 28, Roscosmos Director General Dmitry Rogozin said on Twitter that the incubation period for any crew exposure to the coronavirus had passed and that the astronauts were feeling fine. Earlier in April, NASA expressed complete confidence in the astronauts' health and the integrity of the crew's prelaunch quarantine.

"His passing is an irreparable loss for Russia's rocket and space industry, as well as the country's science," Roscosmos officials wrote in an official English-language agency statement about his death. Mikrin had worked for Roscosmos since 1981, according to the statement.

Related: Full coverage of the space industry and the new coronavirus

In coverage of Mikrin's positive coronavirus test published on April 15, Russian news agency TASS reported that Mikrin's coronavirus case was asymptomatic and that he was self-isolating at home. Official comments about his death do not specify whether his COVID-19 infection became symptomatic or if other conditions were at play.

"The best doctors fought for his life for several weeks, all the possible means and methods were used, but unfortunately the illness gained the upper hand," Rogozin said in the statement about Mikrin's death. "This comes as a grievous loss for us all — his friends, comrades and colleagues working with him shoulder to shoulder. He will remain in our memory forever."

According to data shared by Rogozin before Mikrin's death was announced, Roscosmos had seen 173 COVID-19 diagnoses and six deaths as of April 30. As of May 6, Russia has more than 165,000 confirmed cases of the disease, which has killed more than 1,500 people there, according to data collated by Johns Hopkins University.