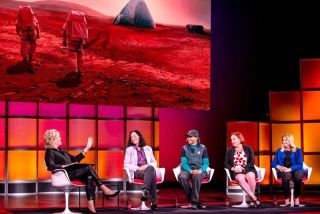 Journalist Lynn Sherr (far left) moderated a panel of space experts for the World Science Festival event "We Will Be Martians," held in New York City on May 29, 2019. From left to right, next to Sherr is Michelle Rucker, followed by Dr. Yvonne Cagle, then Kim Binsted, and seated far right is Ellen Stofan.
(Image: © World Science Festival/Greg Kessler)

NEW YORK — Sending astronauts to Mars will be hard, but a panel of experts considered the details of how to make it work — from living underground to exercising in space and even making bread on the Red Planet — during an in-depth, imaginative conversation at this year's World Science Festival.

The route to the main topic here for the May 29 event "We Will Be Martians" included an early pit stop to discuss the moon. In particular, the panel described how a crewed lunar-return project like Artemis, recently proposed by NASA, could support a human mission to Mars.

Related: Watch the Clouds on Mars Glide by in This Curiosity Rover Video

Sherr asked NASA engineer Michelle Rucker about the basics, like how NASA decides when to launch.

Sending any spacecraft toward Mars is like passing a football to someone, said Rucker, in that a person shouldn't aim where the receiver is now, but instead should shoot toward the spot where the receiver will be in the future. The latter situation is an optimal alignment, Rucker said, noting that at this point you're anticipating a future position and not launching at the moment when Earth and Mars are closest to one another. (During the best alignment, a spaceship could travel from Earth to Mars in about nine months, according to NASA's Goddard Space Flight Center.)

To Sherr's question about what humans will take along for the ride, the panel said that Red Planet crews would take a whole lot of water. Rucker said that the Curiosity rover is the largest object humans have successfully landed on Mars, and a human mission could weigh as much as 20 times more than the robot. Water would not only support human life, but could also block radiation, the panelists said.

Radiation is a huge consideration for these trips, astronaut Dr. Yvonne Cagle pointed out. For journeys that could last half a year, a water barrier might protect a crew from these harmful waves, Cagle said; water could be pumped around the sleeping area on a spaceship heading to Mars to reduce exposure.

Cagle also discussed the NASA Twins Study, in which astronaut Scott Kelly lived for nearly a year in space while his identical twin, astronaut Mark Kelly, remained on Earth as an experimental control. The goal of the study was to see how microgravity, the weightlessness astronauts experience in low-Earth orbit, affects the human body in long-duration spaceflight.

The study offered information about how vulnerable the human body is in space. One idea Cagle offered to boosting immunity involves stem cells, which perhaps could be harvested from astronauts and then replanted back into the original astronaut bodies, Cagle said. This would combat some of the damage the body would experience in space. Cagle, who is also a physician, added that people planning long-term spaceflight will have to consider procedures to repair injuries in low gravity. Instruments that could keep blood contained would be important, since liquids would float.

It's not just physical health that would need attention and mending. Mental health is also important and could deteriorate due to sleep deprivation or lack of creative activities and physical exercise. Cagle said activities that are restorative and refreshing, like movement, photography, music and art, would be critical.

Astronauts en route to Mars would also have to balance interpersonal relationships to support their mental health. To do that, mission planners will have to facilitate periodic communication between astronauts and their loved ones on Earth and also select compatible individuals for a long-duration crew.

A person who is the life of the party, according to the panelists, could be great initially, but would also need to know when to give others some personal space. Missions could support valuable private time and mental exercise by installing separate modules on the spacecraft so that crew members would have different places to go.

These mental health concerns are not just for the journey itself. Mars' inhospitable conditions, with a thin atmosphere that offers little heat insulation or protection from radiation, means that a visiting crew would have to live in sealed environments.

Living behind enclosures  could affect the psyche, too: Planetary geologist Ellen Stofan said that astronauts, when asked what they longed for the most during their time on the International Space Station, said they missed feeling the wind on their faces and the smell of rain.

These sealed environments are nevertheless critical for any attempt at human exploration of the Red Planet. Panelists said NASA needs to understand the dust storms and planetary seasons that could erode the walls or doors of a human habitat.

And while getting underground could protect humans from dangerous radiation, that would require artificial lighting, which could lead to depression.

There are also the microscopic multitudes to keep in mind. The trillions of bacteria, viruses and fungi that dwell in almost every human body part, also known as the human microbiome, could change in space as it responds to a new environment, which would affect a crew's resiliency. Mars missions would also have to adhere to planetary-protection guidelines; every mission that launches to another world needs to be free of Earthly microbes that could contamination another celestial body.

The panelists also briefly discussed cooking on Mars. Space scientist Kim Binsted noted that a bag a flour offers a longer-term source of food than a sealed meal. And while cooking on Mars presents its challenges — because, for example, there's less gravity — finding a way to send along ingredients rather than single meals could extend a mission's food supply or reduce a spacecraft's weight.

"So, we'll be making our own bread on Mars?" asked Sherr.