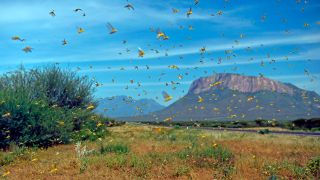 Billions of locusts have been swarming throughout eastern Africa for months, ravaging crops and threatening the food source for millions of people in the region. Thankfully, NASA's Earth-observing satellites might be able to help.

Traveling locust swarms are common in Africa, southern Asia and the Middle East, but the insect population started getting out of hand in December 2019 when hundreds of millions of the voracious bugs invaded Kenya and decimated about 173,000 acres of cropland. The enormous swarms of locusts have since spread to 10 countries in Africa, putting millions at risk of going hungry, according to the United Nations (UN).

The UN said that "unusual climate conditions" have enabled the locusts to reproduce more rapidly, and that the arrival of the rainy season (from March through May) will likely make matters worse. Now, NASA is partnering with the UN to stop these locust swarms by better understanding the insects' relationship with Earth's climate.

By monitoring soil moisture and vegetation from space using satellites, NASA scientists can learn how environmental changes affect locust populations and use that information to stop outbreaks before they start.

"The approach that helps prevent large-scale infestations is to catch the locusts very early in their life stages and get rid of their nesting grounds," Lee Ellenburg, the food security and agriculture lead for SERVIR at NASA's Marshall Space Flight Center, said in a statement. SERVIR is a joint program between NASA and the U.S. Agency for International Development that's dedicated to improving environmental policies in developing nations with the help of satellite data.

Equipped with satellite data and imagery, the SERVIR team partnered with the UN's Desert Locust Information System and its Food and Agriculture Organization (FAO) to learn more about the locusts' behavior. By combining satellite data with information about where, when and why locust swarms emerge, scientists have come up with a strategy to reduce their populations.

Adult locusts are hard to stop in their tracks because the insects can fly 30 to 90 miles (50 to 150 kilometers) in a single day. So, to thwart these disastrous locust outbreaks, scientists need to target locust eggs and young locusts — called "hoppers" because their wings have not yet developed — because they are less mobile and make easier targets.

"Once locusts lay the eggs and hatch, they start looking for vegetation to feed on," Catherine Nakalembe, a food security researcher with SERVIR and NASA Harvest, said in the statement. "They start migrating, looking for more to eat, and then keep multiplying."

Scientists know that locusts prefer to lay eggs in wet, warm soil and baby locusts need vegetation nearby to sustain them before their wings develop (once they have wings, they can forage across larger distances). By monitoring soil moisture and vegetation from space, satellite data can help researchers predict locust "baby booms" and nip these outbreaks in the bud.

"The data we have so far show a strong correlation between the location of sandy, moist soils and locust activity," Ashutosh Limaye, NASA's chief scientist for SERVIR, said in the statement. "Wherever there are moist, sandy locations, there are locusts banding or breeding." The locations determined to be prime breeding spots can then be sprayed with pesticides to stop the locust population from growing out of control.

"Our goal is to learn from FAO how to find out where the breeding grounds are," Ellenburg said. "If the prevailing conditions indicate that locusts will hatch and be taking off, the goal is to go early and destroy their nesting grounds."

Satellite data has shown that the Horn of Africa has recently been much greener than usual because the region received about four times the average amount of rainfall between October and December — which is the wettest "short rain season" the area has seen in four decades.

The extra rainfall created a wet environment where plants can thrive, thereby providing ideal breeding grounds for locusts as well. Now that the "long rain season" has begun, NASA is studying this satellite data to create forecasts of where and how additional locust outbreaks might occur.