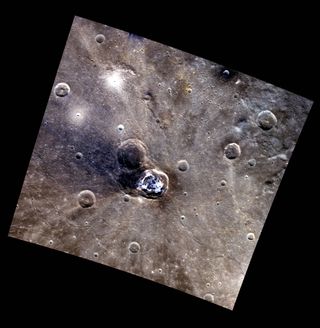 The ballet "The Nutcracker" and the planet Mercury have something in common.

It all starts with NASA's MErcury Surface, Space ENvironment, GEochemistry, and Ranging spacecraft, or MESSENGER. The mission team, which launched in 2004 and ended operations in 2015, chose to name Mercury's craters after deceased artists, composers, or writers. Names were chosen by team members or selected from public contests by the International Astronomical Union, which oversees the official names of astronomical objects..

And one fascinating crater got the name Balanchine, after 20th century choreographer and New York City Ballet founder George Balanchine, well-known for his work on the Christmas ballet "The Nutcracker."

Mercury's surface is speckled with craters. The closest planet to the sun has a thin atmosphere that can't break-up incoming meteors. Fortunately for planetary scientists, these craters and volcanic features are fountains of scientific knowledge, expanding our understanding of planetary processes and formation. As NASA's MESSENGER team gained their unprecedented views of the moon-sized world, they had to start naming new features.

"This is my favorite crater on Mercury because I named it Balanchine," Denevi shared during a presentation at the American Museum of Natural History in October. "I’ve done ballet my whole life, I’m a huge fan of dance," she said.

The crater has an area of diffuse blue ejecta within it. "I got to name this crater Balanchine because it reminded me of a nice light bright tutu," Denevi said.

In the ballet "Serenade," the dancers all famously wear blue-lavender tutus. "Sometimes you get to tie in your own hobbies into science," Denevi added.

The light and dark regions of Balanchine crater appear on other parts of the planet and these type of features became focal points of the MESSENGER team.

The dark regions are caused by graphite, the same material found in pencils. Looking at a picture of Mercury long enough, and there's something strangely familiar and altogether odd about its appearance. The pockmarked surface sure does resemble Earth's moon, but its mares — or lava deposits — are much darker.

It's possible that Balanchine crater formed on top of a preexisting impact crater, according to a NASA description of a Balanchine crater image. The blue-gray deposit was redistributed by the crash that created Balanchine, and the deposit's low reflectance hints at the material's underground origin, where some graphite floats on top of the magma ocean.

The bright regions are unique to the solar system. Known as hollows, these regions inside several of Mercury's craters look like geological scars.

According to Denevi, these "beautiful" features are thought to be concentrations of material that the meteor exposed from Mercury's depths. It's not normally found on Mercury's surface, and on the planet's hot surface, rocks made of this unstable subterranean material can evaporate or sublime.

The discovery of hollows "requires a big shift in thinking" for planetary scientists, said Denevi, because they have to figure out what could have been swept up from the early solar system as Mercury formed, but that cannot withstand Mercury's surface heat.

One element that isn't stable in hot places is potassium. Scientists have estimated that potassium is prevalent on Mercury, but, this could mean the first planet from the sun formed further away from the star than its current orbit and challenging current models.

Another noteworthy craters on Mercury is Eminescu (named after Romanian poet Mihail Eminescu), Raditladi (named after Leetile Disang Raditladi, a Botswanan poet and playwright), and Sveinsdóttir (named after Júlíana Sveinsdóttir, one of Iceland's first woman painters and textile artists).

You can see the full list of Mercury crater names here.