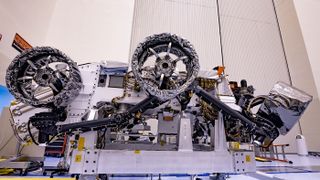 Three of the six flight wheels that will travel to Mars can be seen attached to NASA's Perseverance rover (which is inverted on a handling fixture) on March 30, 2020 at the Kennedy Space Center in Florida. The protective antistatic foil covering the wheels will be removed before launch this summer.
(Image: © NASA/JPL-Caltech)

We're just 100 days out from the launch of NASA's next Mars rover.

Perseverance, the car-size robot at the heart of NASA's life-hunting Mars 2020 mission, is scheduled to lift off from Florida's Cape Canaveral Air Force Station during a three-week window that opens on the morning of July 17 — 100 days from today (April 8).

I’m 💯 days away from the opening of my launch period, and my team and I are continuing to persevere. We are taking things step by step, day by day to get to the launch pad. Mark July 17 on your calendars and keep checking in for updates. https://t.co/KfJ3JXDZ67 pic.twitter.com/97LBtyLOkHApril 7, 2020

Perseverance got its six wheels just a few days later, on March 30, NASA officials said. These wheels — the mission's final flight versions, not the test ones that Percy used to take a spin in December 2019 at NASA's Jet Propulsion Laboratory (JPL) in California — are slightly different than the ones aboard Perserverance's predecessor, the Curiosity rover.

"Machined out of a block of flight-grade aluminum and equipped with titanium spokes, each wheel is slightly larger in diameter and narrower than Curiosity's, with skins that are almost a millimeter thicker," NASA officials wrote in a statement on Friday (April 3).

"They also feature new treads, or grousers: In place of Curiosity's 24 chevron-pattern treads are 48 gently curved ones," they wrote.

Curiosity's wheels have taken a beating since the rover touched down inside Mars' Gale Crater in August 2012. Indeed, team members began adjusting Curiosity's driving routes early in the mission, which is ongoing, to minimize damage and wear. But testing in the Mars Yard at JPL, which built both Curiosity and Perseverance, suggests that the new rover's wheel design will hold up better while offering traction that's at least as good, NASA officials said.

Perseverance will explore Mars' 28-mile-wide (45 km) Jezero Crater, which harbored a lake and a river delta billions of years ago. The rover will hunt for signs of ancient life on Mars, characterize the region's geology and collect and cache samples for future return to Earth.

Perseverance will perform a variety of other science and technology work in Jezero as well. For example, the rover carries an instrument that will generate oxygen from Mars' carbon-dioxide-dominated atmosphere — gear that could help humanity establish an outpost on the Red Planet someday.

Perseverance also will launch with a small helicopter attached to its belly, which will attempt to pioneer aerial exploration of the Red Planet.

Two life-hunting Mars rovers were originally supposed to get off the ground this summer. But the launch of Rosalind Franklin, part of the European-Russian ExoMars program, has been pushed to 2022 to address parachute problems and other issues. (Mars and Earth align properly for planetary missions just once every 26 months.)