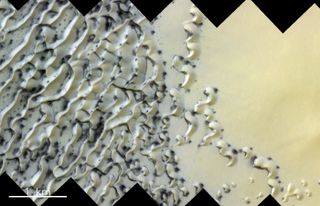 Sand dunes ripple near Mars' north pole in this image captured by the European/Russian Trace Gas Orbiter. The photo was taken on May 25, 2019, and released on Sept. 16.
(Image: © ESA/Roscosmos/CaSSIS, CC BY-SA 3.0 IGO)

The photo, which TGO snapped with its Colour and Stereo Surface Imaging System (CaSSIS), shows some effects of springtime warming in the Red Planet's far north.

"During winter in the polar regions, a thin layer of carbon dioxide ice covers the surface and then sublimates — turns directly from ice into vapor — with the first light of spring," European Space Agency (ESA) officials wrote about the image, which was taken May 25 but just released today (Sept. 16).

"In the dune fields, this springtime defrosting occurs from the bottom up, trapping gas between the ice and the sand," they added. "As the ice cracks, this gas is released violently and carries sand with it, forming the dark patches and streaks observed in this CaSSIS image."

Related: Photos: The European-Russian ExoMars Missions to Mars in Pictures

"The curved tips of the barchan dunes point downwind," the officials added in the same statement. "The transition from barchan to barchanoid dunes tells us that secondary winds also play a role in shaping the dune field."

Barchan dunes aren't confined to the Martian poles; NASA's Curiosity rover has also encountered them on the floor of the 96-mile-wide (154 kilometers) Gale Crater, which sits just south of the Red Planet's equator.

TGO launched in March 2016 along with a landing demonstrator called Schiaparelli. Together, the two spacecraft comprised the first phase of the two-part ExoMars program, a collaboration between ESA and Roscosmos, Russia's federal space agency.

Schiaparelli crashed during its landing attempt in October 2016, but TGO arrived safely in orbit around the same time. TGO soon began sniffing the Red Planet's atmosphere for methane — which could be a sign of Mars life, if any has ever existed — and other low-abundance gases.