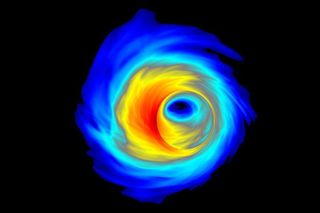 Like the famous video game superhero Pac-Man, black holes may grow by gobbling up feasts — in their case, other black holes, a new study found.

Black holes drawn to the supermassive black hole get stuck in the disk of matter that surrounds it (known as an accretion disk). Over time, some of these smaller black holes collide, merge, and become bigger and stronger.

This scenario could help to explain a peculiar situation that astronomers observed recently when they detected a merger by measuring gravitational waves (ripples in space-time caused by large interactions in space, such as black holes coming together). Research teams around the world have so far identified 10 black hole mergers, but one of these mergers had unusual characteristics, with higher spin and mass measures than the others. It seemed to be outside the realm of scientists' current understanding.

The next step in understanding this strange merger, and potentially providing evidence that it resulted from a "Pac-Man" merger, would be to find more gravitational waves showcasing the signature of large, spinning black holes, the research team behind the study said in a statement.

"This could be a unique way of probing the physics around these supermassive black holes," Richard O'Shaughnessy, a team member participating in the new study and an astrophysicist at the Rochester Institute of Technology in New York, said in the statement. "It offers unique insight into how the centers of galaxies grow, which is of course essential to understanding how galaxies as a whole grow, which explains most of the structure in the universe."

This research was published on Nov. 1 in the journal Physical Research Letters.