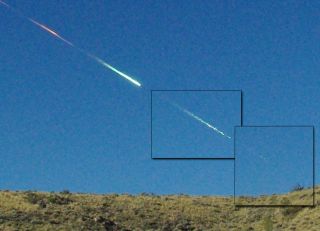 A composite image showing how the Sutter's Mill meteorite fell in California in April 2012. In 2020, researchers uncovered evidence of what is most likely the earliest recorded incident of a person being hit and killed by a meteorite in what is now Sulaymaniyah, Iraq, on Aug. 22, 1888.
(Image: © L. Warren; composite by P. Jenniskens/NASA Ames/SETI)

Researchers have uncovered the earliest evidence of a person being hit and killed by a meteorite falling to Earth.

A group of Turkish researchers made the discovery while searching through Turkish state archives and they found that the event, which killed one person and injured another, occurred in what is now Sulaymaniyah, Iraq, on Aug. 22, 1888.

There have long been claims and stories of people being hit by meteorites. However, many of these stories are not substantiated by sufficient evidence, be it a written report or some other historical marker. "This issue might be due to the fact that either the manuscript was written in a language other than English, or there is not enough interest in historical records," the researchers wrote in a new study announcing the findings.

Video: The story of Ann Hodges and the meteorite that hit her

But, in this study, the researchers searched through Turkish state archives. "Almost every single event was recorded in the archives. I mean, if you sneeze, it was recorded somehow. Natural events, financial issues, governmental messaging, etc,"  lead author Ozan Unsalan, an associate professor in the physics department at Ege University, told Space.com.

Amidst this wealth of documents, they found letters written by local authorities shortly after a meteorite fell to Earth, barreling into a hill in what is now Sulaymaniyah, Iraq, on Aug. 22, 1888. The report stated that one man was killed and another paralyzed by the impact. In total they found three letters, written in Ottoman Turkish, that described the event. They also found evidence that the event was reported to Abdul Hamid II, the 34th sultan of the Ottoman Empire.

According to this report, the meteorite that killed and severely injured two men was one of many that fell to Earth during a 10-minute period of time. Additionally, people in a nearby city reported witnessing a fireball falling to Earth.

Now, this team of researchers is still working to find additional written and physical evidence of this impact event. "We need to find a possible reply from Abdul Hamid, the sultan himself. Also, we are very curious and need to find that real sample [of the meteorite] delivered to the museum," Unsalan said. "After that, we will classify the sample type according to the scientific criteria." Unsalan added that they intend to continue searching through the archives for incredible records such as this.

Related: How often do meteorites hit the Earth?

More recently, in 1954, Ann Hodges, a resident of eastern Alabama in the United States, was also hit by a meteorite and miraculously was (relatively) fine. She was asleep on her living room couch when a softball-sized, 8.5-lb. (3.8 kilograms) fragment of a larger meteorite barreled through her ceiling and struck her.

Hodges was surrounded by neighbors and, soon, the media and was ultimately rushed to the hospital. However, while she did end up with a pretty gnarly bruise, she was only mildly injured.

Even more recently, in 2009, Gerrit Blank, a 14-year-old German boy, was also struck by a meteorite. A pea-sized meteorite struck him, only mildly injuring him but surely scaring him.

The findings from this new study were published on April 22 in the journal Meteoritics & Planetary Science.