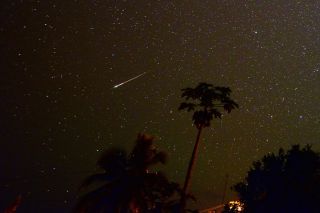 Look up! Tonight (July 29), into early Tuesday (July 30) morning, skywatchers will be able to view a dazzling double meteor shower, according to the American Meteor Society (AMS).

The Southern Delta Aquariids and the Alpha Capricornids will speckle the night sky tonight, combining to 20-25 visible meteors per hour, Accuweather reports. This will be the first visible meteor shower since the Eta Aquarids peaked in May.

Skywatchers can expect the Southern Delta Aquariids, which will be most visible in the Southern Hemisphere, to be mostly faint meteors - mostly lacking trailing trains and fireballs, the AMS reports. The Southern Delta Aquariids get their name from Delta, the third-brightest star in the Aquarius constellation. Since they are visible in the southern sky, skywatchers will want to make sure the southern horizon is not obstructed.

The Alpha Capricornids are not a very strong shower, however it is expected to produce a relatively high percentage of fireballs and will be equally visible on both sides of the equator, according to the AMS.

The concurrent meteor showers will be most visible just after midnight in the eastern U.S. where it is predicted to be mostly cloud-free. Rain and cloud coverage will likely obscure the skies for skywatchers in the central and western U.S. Tonight, the waning crescent moon will only be 6% full. The next full moon will be on August 15, just after the Perseids meteor shower peaks.

Related: How to See the Best Meteor Showers of 2019

There are a few ways to improve your chances of viewing a spectacular meteor shower.

According to Earthsky.org, if you watch for showers in the hours before dawn, distance yourself from bright light pollution if you live in or near a city and let your eyes adjust to the dark (it can take up to 45 minutes to adjust), you can maximize your meteor shower-watching experience.