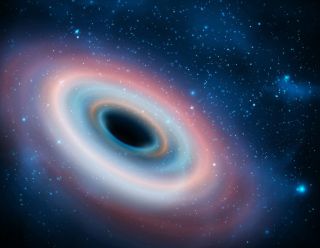 Thanks to their tendency to suck in everything around them — even light — black holes don't divulge clues about their origins or histories. This frustrating fact led scientists in the 1960s to declare that black holes "have no hair." By this, researchers meant that black holes had very few distinguishing characteristics to separate one from another.

Now, new calculations suggest that some black holes can grow hair, but they can't keep it for long. According to the new work, black holes that spin at nearly (but not quite) the maximum rotation possible show some unique properties. But these properties don't persist long before the black hole goes "bald" and becomes indistinguishable from others of its sort.

"This is an interesting find, because it's a transient behavior," said study author Lior Burko, a physicist at Theiss Research in California.

The metaphor for black hole hair grew out of math done by physicists Jacob Bekenstein and John Wheeler in the 1960s and early 1970s. The researchers argued that under Einstein's general theory of relativity, black holes can be described by just three observable parameters: their mass, their angular momentum and their electric charge. Everything else, all other information, is trapped within the black hole's gravitational pull and is thus impossible to observe. Given two black holes that matched on all three values, it would be functionally impossible to differentiate one from the other.

Since then, theorists have been on the hunt for something that can distinguish black holes from one another. If scientists could find that something, it might open up new revelations about the origins of particular black holes. For instance, while many black holes are thought to be the remnants of collapsed stars, some may have formed right after the Big Bang, coalescing out of abnormally dense regions in the earliest universal fabric. One of these primordial black holes would be indistinguishable from a stellar black hole if the two had the same mass, angular momentum and electric charge.

In 2018, a group of researchers led by physicist Dejan Gajic, at the University of Cambridge, found that extreme black holes, those with the maximum possible electric charge, do have unique properties that can differentiate the objects from one another. These properties involved measurable changes to a black hole's event horizon (the point at which gravitational force is so strong that light can't escape) and its Cauchy horizon (the point at which the causal relationship between the past and the future breaks down due to the time-bending effects of a strong gravitational field).

In both of these near-extreme black holes, the researchers found evidence of "hair" — for a time. The unique properties of near-extreme black holes are measurable when a simulated black hole first forms, the researchers reported Nov. 15 in the journal Physical Review Research, but decline over time in a quadratic function of time. That means the values shrink rapidly at first, then continue to shrink more slowly as time goes on. (The research team did not calculate how fast this would occur in real time, which would differ depending on the mass, spin and charge of a given black hole.)

"For a short time, [a nearly extreme black hole] behaves like it has hair like a maximally spinning black hole would," Burko told Live Science. "But after some time, it starts losing this hair so that eventually it becomes bald again."

While all of these calculations are currently theoretical, there is hope for real-world observations that would match or contradict the findings. The Laser Interferometer Gravitational-Wave Observatory (LIGO) experiment is now actively measuring gravitational waves, which are ripples in space-time created by massive objects like neutron stars and black holes. LIGO uses two ground-based observatories to measure gravitational waves. And these measurements could provide a look at hairy black holes.