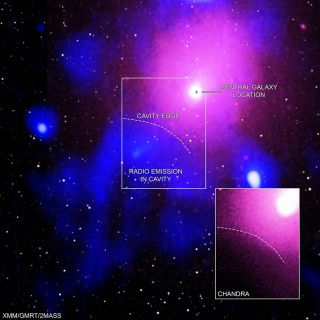 Evidence for the biggest explosion seen in the universe comes from a combination of X-ray data from NASA’s Chandra X-ray Observatory and Europe’s XMM-Newton space telescope, and the Murchison Widefield Array and Giant Metrewave Telescope, as shown here. The eruption is generated by a black hole located in the cluster's central galaxy, which has blasted out jets and carved a large cavity in the surrounding hot gas. Researchers estimate this explosion released five times more energy than the previous record holder and hundreds of thousands of times more than a typical galaxy cluster.
(Image: © X-ray: Chandra: NASA/CXC/NRL/S. Giacintucci, et al., XMM-Newton: ESA/XMM-Newton; Radio: NCRA/TIFR/GMRT; Infrared: 2MASS/UMass/IPAC-Caltech/NASA/NSF)

Astronomers have spotted a cosmic blast that dwarfs all others.

A gargantuan explosion tore through the heart of a distant galaxy cluster, releasing about five times more energy than the previous record holder, a new study reports.

"In some ways, this blast is similar to how the eruption of Mt. St. Helens in 1980 ripped off the top of the mountain," study lead author Simona Giacintucci, of the Naval Research Laboratory in Washington, D.C., said in a statement. "A key difference is that you could fit 15 Milky Way galaxies in a row into the crater this eruption punched into the cluster's hot gas."

Related: Our expanding universe: Age, history and other facts

The explosion occurred in the Ophiuchus cluster, which lies about 390 million light-years from Earth. Giacintucci and her colleagues think the source was a supermassive black hole in one of the cluster's constituent galaxies — specifically, jets of radiation and material spewing from the light-gobbling monster, which are powered by inflowing gas and dust.

The possibility of an incredibly powerful Ophiuchus explosion was first raised in 2016 in a study led by Norbert Werner, which examined images captured by NASA's Chandra X-ray Observatory. Werner and his colleagues reported a strangely curved edge in the cluster, which could be part of the wall of a cavity formed by a blast. And what a blast it would be: The scientists calculated that it would take about 5 times 10^54 joules of energy to create such a cavity. (For perspective, humanity's total global energy consumption each year is about 6 times 10^20 joules.)

But the 2016 study didn't establish that an explosion actually was responsible for that curved edge. Giacintucci and her colleagues just made that determination, after analyzing additional X-ray data from Chandra and Europe's XMM-Newton space telescope, as well as radio information gathered by the Murchison Widefield Array in Australia and the Giant Metrewave Radio Telescope in India.

The combined data show that the curved edge is indeed part of a cavity wall, because it borders an area rich in radio emission. That emission likely resulted when the black hole's outburst accelerated electrons to nearly the speed of light, the researchers said.

"The radio data fit inside the X-rays like a hand in a glove," study co-author Maxim Markevitch, of NASA's Goddard Space Flight Center in Greenbelt, Maryland, said in the same statement. "This is the clincher that tells us an eruption of unprecedented size occurred here."

The energy released by the Ophiuchus blast is hundreds of thousands of times greater than explosions typically seen in galaxy clusters, the researchers said. And it's about five times higher than the previous record holder, an eruption in the cluster MS 0735.6+7421.

The Ophiuchus fireworks appear to be over, by the way; the radio data show no evidence for ongoing jet activity, the scientists said.

The Chandra data reveal just one region of radio emission. That's a bit odd, because black-hole jets usually go off in two different directions. It's possible that the jet-feeding gas on the other side — the one opposite the detected cavity — was less abundant and the radio emission there dissipated more quickly as a result, the researchers said.

The new study was published in the Feb. 27 issue of The Astrophysical Journal. You can read a preprint of the paper for free via arXiv.org.