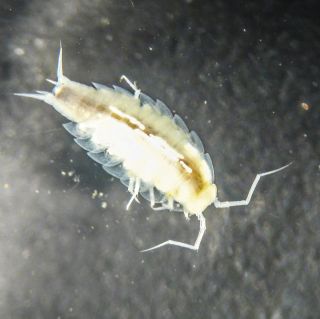 This crustacean from the Alpioniscus species was discovered during the European Space Agency's CAVES 2012 training program. The ancestors of the terrestrial isopods seem to have evolved from aquatic life to live on land. Surprisingly, the astronauts found a species that has returned to living in water, completing an evolutionary full circle. This image was taken by NASA astronaut Mike Fincke as part of the CAVES training.
(Image: © M. Fincke/ESA)

In training for exploration of the final frontier, astronauts have made a contribution to our understanding of life here on Earth.

Over the past few years, astronauts from multiple countries have helped biologists collect specimens of an odd, tiny crustacean during caving expeditions on the Italian island of Sardinia. The little beast, it turns out, was new to science, and it's officially described in a recent paper in the journal ZooKeys.

The newfound creature is related to terrestrial isopods, a diverse group known to anyone who has ever flipped a log in damp environments. Their many common names — potato bug, pill bug, sow bug, roly-poly and wood louse, to name but a few — are a testament to these invertebrates' ubiquity. (But the "bug" part is incorrect; isopods are more closely related to crabs and shrimp than to insects. And, if you'll allow a bit more pedantry, "bug" technically refers to certain insects with sucking mouthparts.)

Related: CAVES 2016 In Pictures: How Astronauts Train for Space by Cave Diving

The newly described isopod is different from most of its kin, however. The blind, colorless crustacean, which is less than 0.4 inches (1 centimeter) long, is aquatic, scraping out a living in cave ponds.

It was first found during the 2012 edition of the CAVES (Cooperative Adventure for Valuing and Exercising human behaviour and performance Skills), a two-week European Space Agency training course held in Sardinia's Sa Grutta cave system. The experience is designed to help astronauts learn to work together in a space-like environment.

CAVES also involves a variety of other research activities, as the isopod discovery shows. Astronauts from Europe, the United States, Canada, Russia, Japan and China helped collect and describe the little crustacean in 2012 and on subsequent CAVES expeditions.

The astronauts' aid is reflected in the little beast's scientific name, Alpioniscus sideralis. "Sideralis" is from the Latin word for "star."

"I would like to think that when humans land on Mars and explore its caves, this experience will help them to look for other species knowing that life has few limits and can develop in the most inhospitable places," Paolo Marcia, a zoologist from the University of Sassari in Italy who heads the CAVES biology experiments, said in a statement.