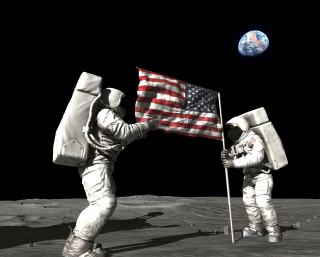 Commander Neil Armstrong and Lunar Module pilot Edwin "Buzz" Aldrin had to travel approximately 238,855 miles (384,400 kilometers) to land on the moon, but a new mobile app brings the moon right to your backyard.

The Smithsonian Channel recently released an immersive augmented reality (AR) app that re-creates the full timeline of the Apollo missions, allowing users to relive history for themselves.

"It was important for us to do justice to the story," Charles Poe, senior vice president of production for Smithsonian Channel, told Space.com.

The "Apollo's Moon Shot AR" app is based on the channel's six-part television series, "Apollo's Moon Shot," which follows the journey of the moon landing program. The game is an extension of the stories told in the series, according to Poe, using augmented reality to bring people into the history.

And people are literally brought into it. Through their mobile or tablet, players can set up a portal to the moon wherever they are, step into the projection and transport themselves to a new world where they can walk around and explore their surroundings.

Once they've traveled to the moon, users get to pick their own missions, from piloting the Apollo lander to the moon's surface, shooting off a Saturn V rocket or launching a rocket from Earth all the way to the moon without running out of fuel.

"You want it to be challenging, living up to the real achievement," said Poe.

Using AR tools that were created in collaboration with Immersion, a European company that specializes in this type of technology, the team at the Smithsonian Channel re-created the lunar surface and surrounding artifacts as accurately as possible.

Experts at the Smithsonian reviewed the game's programming to ensure that the scenarios that were created were true to life.

"That's one of the things that sets us apart," said Poe. "We wanted to make sure we were giving viewers a different perspective by creating that exact scenario."

The app is available through the iOS app store and on Google Play.