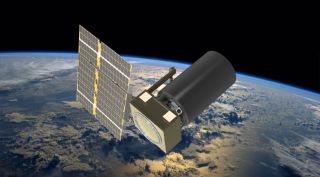 WASHINGTON — An experimental Air Force small satellite intended to test space situational awareness technologies will be a secondary payload on the upcoming Falcon 9 launch of a commercial communications satellite and lunar lander.

Spaceflight, the Seattle-based company that brokers rideshare launch services, confirmed in a Feb. 11 statement that it will be flying the S5 satellite for the Air Force Research Laboratory (AFRL) as a secondary payload on the Falcon 9 launch of the PSN-6, or Nusantara Satu, communications satellite built by Space Systems Loral, a division of Maxar Technologies, for Indonesian company PT Pasifik Satelit Nusantara.

That launch, scheduled for no earlier than Feb. 21 from Cape Canaveral Air Force Station in Florida, is best known for carrying the Beresheet lander developed by Israel's SpaceIL, a former Google Lunar X Prize team, as a secondary payload. Beresheet will be released into geostationary transfer orbit and gradually extend its orbit towards the moon, a process that will take two months.

Industry observers, though, had believed there was at least one additional secondary payload on the launch, but its identity wasn't confirmed until the Spaceflight announcement. That release, though, provided few details about S5 and its mission.

Blue Canyon Technologies announced in September 2017 that it won a contract from AFRL to build two smallsats intended to operate in geostationary orbit. One was identified as S5, a 60-kilogram satellite designed to perform a space situational awareness mission using a payload provided by Applied Defense Solutions. The illustration accompanying the release showed an optics system attached to a satellite bus and solar array.

"The objective of the S5 mission is to measure the feasibility and affordability of developing low cost constellations for routine and frequent updates to the GEO space catalog," Blue Canyon Technologies said in its statement.

Applied Defense Solutions received a Small Business Innovation Research (SBIR) Phase 2 award from the Air Force in 2017 for a project called Small Satellite System for Space Surveillance. "This flight experiment will demonstrate viability of utilizing a low cost space sensor to supplement the SSN," or Space Surveillance Network, the abstract for the SBIR award states.

The project called for using a 30-centimeter telescope, like that used on the Space Based Surveillance System pathfinder satellite, "married with a mission operations concept for detecting and tracking objects near the geosynchronous belt," the abstract stated. Blue Canyon was cited in the abstract as one of the partners on the project.

Applied Defense Solutions was acquired last July by L3 Technologies for approximately $50 million. That acquisition "strengthens our business in the mission-critical aspects of space situational awareness, particularly in the area of multi-domain command and control, which is a key element of our country's national security strategy objectives," said Christopher Kubasik, president and chief executive of L3, in a statement about the deal.

The S5 satellite will be attached not to the rocket's upper stage or payload adapter but instead to the Nusantara Satu satellite itself, Spaceflight explained in its statement. "Before the telecommunications satellite reaches its final GEO position, it will separate the S5 spacecraft which will then turn on and start its mission," Spaceflight said.

For Spaceflight, a leading company in arranging launches to sun-synchronous and other low Earth orbits, this mission will be its first to deliver payloads to geostationary orbit and beyond. "The launches we pursue continue to get more sophisticated and demonstrate that our expertise goes beyond identifying and scheduling launches," Curt Blake, chief executive of Spaceflight, said in a statement. "With this mission, Spaceflight is demonstrating that the moon is in reach."