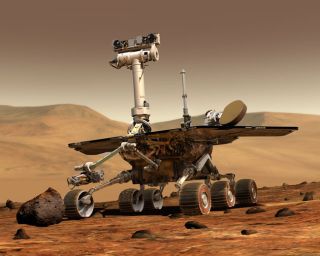 With spring on Mars in full swing, NASA is taking advantage of the Martian season's ever-longer periods of daylight to try again to reawaken its stuck rover, Spirit, after months of silence.

The Mars Spirit rover has been dormant since March 22, 2010. Mission controllers at the Jet Propulsion Laboratory in Pasadena, Calif., are hopeful that the plucky rover survived the harsh Martian winter and will wake up any day now.

"The amount of solar energy available for Spirit is still increasing every day for the next few months," said John Callas, NASA's Mars rover project manager at JPL. "As long as that's the case, we will do all we can to increase the chances of hearing from the rover again." [Q & A with Mars rover manager John Callas]

NASA's Mars rover team had anticipated that Spirit would enter a hibernation-like low power mode during the planet's long winter season, with minimal activity except for charging and heating its batteries and keeping its internal clock running.

With most heaters shut off, Spirit's internal temperatures dropped to the coldest ever experienced by the rover on Mars. That stress may have caused damage, such as impaired electrical connections, that would prevent reawakening or, if Spirit returned to operation, reduce its capabilities.

After mid-March, when the days on Mars once again grow shorter, the prospects for reviving Spirit will begin to drop, NASA officials said.

Communication strategies will shift, based on the reasoning that Spirit's continued silence is probably  due to factors beyond low power. NASA officials say they will consider it a real possibility that damage from the winter's cold ended Spirit's mission.

Spirit landed on Mars Jan. 4, 2004, to look for evidence of past water activity. The mission was originally designed to last for three months, but Spirit put in nearly six years of extended duty.

After working far beyond its design life, the rover eventually lost use of its drive motors on two of its six wheels. It has been trapped in Martian sand for over a year, and while NASA rechristened Spirit as a stationary probe, the rover's immobility meant it was unable to obtain a favorable tilt for solar energy during its fourth Martian winter, which began last May.

Spirit's twin, Opportunity, remained active and is currently making its way toward a huge crater called Endeavour. Opportunity landed on the Red Planet three weeks after Spirit, and both rovers made important discoveries about wet environments on ancient Mars that perhaps were favorable for supporting microbial life.

Spring on southern Mars began in November 2010, but even before that, NASA's Deep Space Network of antennas in California, Spain and Australia were listening for Spirit daily. Meanwhile, the rover team was sending commands to try to elicit a response from the dormant rover.

NASA also will listen on a wider range of frequencies to cover added possibilities of temperature effects on the rover's radio systems.

• 6 Facts About NASA's Next Mars Rover