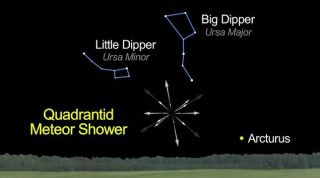 The first meteor display of 2011 – the annual Quadrantid meteor shower – will hit its peak tonight and, weather permitting, could dazzle observers across the Northern Hemisphere, skywatchers say.

The Quadrantid meteor shower is expected to peak at about 8 p.m. EST (5 p.m. PST, 0100 Jan. 4 GMT), with some forecasts of 100 meteors per hour at the height of the "shooting stars" display.

The show will be best in parts of Europe and Asia but unfortunately peaks too soon for U.S. skywatchers to expect more than a handful of shooting stars per hour.

As an added perk, the moon won't interfere with the view of the meteor shower because it is in its "new" phase, when it is passing between the Earth and sun and appears from Earth to be  completely dark.

"There won't be any annoying moonlight to spoil the fireworks display," said amateur astronomer Jane Houston Jones in a skywatching tips video released by NASA's Jet Propulsion Laboratory. "This could be the best shower of the year."

This Quadrantid meteor shower sky map shows where to look in the northeastern sky for the shooting star display.

Unlike other notable meteor showers, which have peak observing periods that can last days at a time, the most dramatic view of the Quadrantids lasts a few hours. That, combined with the fact that the meteors pass by during wintertime in the Northern Hemisphere – when cold temperatures and other weather conditions can be obstacles – sometimes makes the first meteor shower of the year difficult to observe.

One piece of advice: Bring blankets and get comfy. You'll want to dress against the cold December night and sit in a comfortable chair if you plan to spend several hours searching for Quadrantid meteors.

"In general, the higher your latitude the better the observing situation," advised Robert Lunsford, operations manager for the American Meteor Society, in a viewing guide. "Unfortunately, in higher latitudes the weather is usually cloudy this time of year. If not cloudy, the bitterly cold temperatures are a constant danger to the exposed observer."

The meteor shower will appear to originate from the northeast corner of the constellation of Bootes, the Herdsman.

If you're not familiar with the Bootes constellation, look instead for the more recognizable constellations of the Big Dipper and Little Dipper. The Quadrantids should appear to emanate from a point between and below the two star patterns.

Astronomers suspect the meteor shower was created by a near-Earth asteroid called 2003 EH1, which could be the debris of a comet that broke apart. The Quadrantids got their name from a now-defunct constellation called the Quadrans Muralis (or "Mural Quadrant"; a quadrant is an astronomical instrument similar to the sextants used for navigation today).

"What makes this year so special is that the moon is new on the night of the peak, so there will be no interference from moonlight," said Bill Cooke, an astronomer with NASA’s Meteoroid Environment Office, according to the website Spaceweather.com.

That new phase of the moon also sets up another skywatching event – this time, during the day: a partial eclipse of the sun tomorrow (Jan. 4).

Solar eclipses occur when the moon passes between the sun and Earth as seen by observers on the ground. When the moon and sun line up directly, it causes a total solar eclipse. But sometimes the moon obscures only part of the sun's disk, creating a partial solar eclipse. [Photos: The Total Solar Eclipse of 2010]

A partial solar eclipse is what will occur Tuesday. It will be best seen by skywatchers in Sweden, though observers elsewhere in Europe, the northern half of Africa and western Asia should also see the event if the weather allows.

This Jan. 4 solar eclipse skywatching guideshows how observers can catch a glimpse of the partial solar eclipse.

It is extremely important to remember never to look directly at the sun with binoculars or your unaided eye. Doing so can damage your eyes' retinas and cause blindness.

The Jan. 4 solar eclipse will be the first of four partial solar eclipses in 2011, with the others occurring in June, July and November, according to NASA's eclipse website. Two total lunar eclipses will also occur, in June and December, NASA officials said.