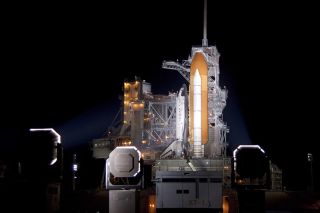 Thenext attempted launch of Discovery and its six-astronaut crew remains to bedetermined, but will come no earlier than Monday at 12:53 p.m. EST (1653 GMT). Topmission managers will meet at 11 a.m. EDT (1500 GMT) today to determine thenext course of action.

NASA originally had until Sunday, Nov. 7 for Discovery to launchwithin the current window, but mission management teams were able to squeak outan extra day (Monday) as a cushion. It was also determined that extending the windowto Tuesday is not possible, meaning if NASA is unable to launch Discovery onMonday, the agency will now have to wait until at least Nov. 30 for the next windowto open, according to NASA spokesman Mike Curie.

The hydrogen gas leak was detected at around 7:30 a.m. EDT(1130 GMT) in a location known as the Ground Umbilical Carrier Plate, which isan attachment point between the external tank and a 17-inch pipe that carriesgaseous hydrogen safely away from the shuttle to the flare stack, where it isburned off.

The external tank is now being drained of the propellant,but it will take an additional 22 hours or so to allow excess hydrogen in thatarea to be purged away before technicians can return to the pad to investigatethe cause of the leak.

"Right now it's a lot of speculation, but the hardwarewas obviously talking to us ? it was leaking significantly," said MikeLeinbach, NASA's shuttle launch director. "We elected to scrub, and thatwas the best course of action."

Similar issues have affected launch attempts for twoprevious shuttle missions, both in 2009. [GRAPHIC:NASA's Space Shuttle ? From Top to Bottom]

Technicians discovered the leak while filling Discovery'sdistinct, orange external tank with liquid oxygen and liquid hydrogen. Thisprocedure, known as tanking, fills the external tank with the 520,000 gallonsof cryogenic propellant that will be used to fuel the shuttle during liftoffand ascent into space.

Discovery will fly an 11-day supply mission to theInternational Space Station to deliver a humanoid robot helper for the stationcrew and a new storage room for the orbiting lab. The orbiter has already faceddown a series of setbacks, including a pair of gas leaks, an electrical glitchand, most recently, uncooperative weather.

The STS-133 mission will be Discovery's grand finale inspace beforebeing retired along with the rest of NASA's shuttle fleet in 2011.