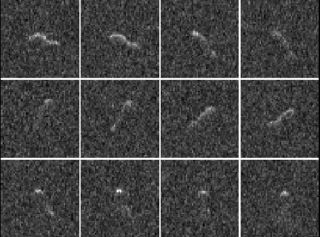 Twelve radar images of the nucleus of Comet Hartley 2, taken by the Arecibo Observatory from Oct. 25 to 27, 2010.
(Image: © NASA/JPL-Cal Tech courtesy of NAIC-Arecibo/Harmon-Nolan [Full Story])

When a NASA probe takes a close look at Comet Hartley 2 next week, it will find the icy wanderer to be curiously pickle-shaped, new radar images reveal.

Comet Hartley 2 will be visited by NASA's Deep Impact spacecraft on Nov. 4 in a close flyby. To prepare for the event, astronomers used the Arecibo Observatory in Puerto Rico to take new radar observations that revealed the comet's pickle shape. [Photo of the pickle-shaped Comet Hartley 2.]

The series of radar images was taken between Oct. 25 and Oct. 27. The images show Comet Hartley 2 as an elongated cylindrical object.

"It kind of looks like a cross between a bowling pin and a pickle," said Tim Larson, project manager of the Deep Impact probe's comet rendezvous mission at NASA's Jet Propulsion Laboratory in Pasadena, Calif. "Only it's about 14,000 times larger and hurtling through space at 23 miles per second."

Scientists using Arecibo's massive radar dish began observations of Comet Hartley 2 on Oct. 24, just four days after the comet zoomed to within 11 million miles (17.7 million km) of Earth — its closest approach to our planet since the comet's discovery in 1986. Arecibo's observations are scheduled to continue through today (Oct. 29), researchers said.

On Nov. 4, the Deep Impact spacecraft will fly to within 435 miles (700 km) of the comet as part of a NASA mission called EPOXI.

"Observing Comet Hartley 2 from the Earth with radar was like imaging a 6-inch spinning cucumber from 836 miles away," said Jon Giorgini, a scientist at JPL and a member of the Arecibo team that imaged the comet.

The observations are helping scientists characterize Comet Hartley 2 ahead of Deep Impact's close encounter, Giorgini said. For example, researchers now know that the comet's nucleus is highly elongated and about 1.4 miles (2.2 km) long, and that it rotates around itself about once every 18 hours.

"In addition, we now know the size, speed and direction of particles being blown off the comet, and we immediately forwarded all this information to the EPOXI team," Giorgini said.

Just what a celestial pickle means for the EPOXI mission remains to be seen, researchers said. Mission scientists are discussing the new findings and what — if anything — they signify for the upcoming comet encounter.

Comet Hartley 2 completes its long, looping sojourn around the sun every 6.5 years. It is a very active comet, researchers said, spitting lots of dust and vapor when it nears the sun and warms up — which is happening now.

Deep Impact's close flyby should help scientists learn more about comet structure and evolution, as well as the early days of the solar system, researchers have said.

This is the Deep Impact spacecraft's second comet encounter. The spacecraft served as the mothership for NASA's Deep Impact mission, which intentionally crashed a probe into Comet Tempel 1 in 2005 to study the object's composition.

Now, the Deep Impact spacecraft is being put to other uses — it's tracking and studying various celestial objects under the umbrella of NASA's broad EPOXI mission. The name is derived from the mission's dual science investigations — the Extrasolar Planet Observation and Characterization (EPOCh) and Deep Impact Extended Investigations (DIXI).