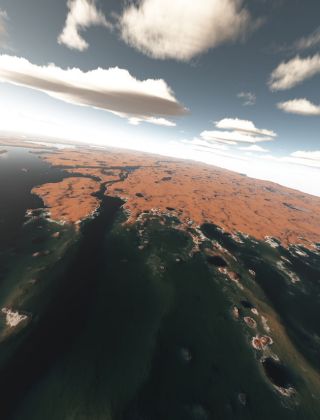 The ancient oceans or seas thought to have covered ancient Mars 3 billion years ago, as shown in this artist's rendition based on actual topography of Mars from NASA Mars Orbiter Laser Altimeter, may have sprung up through surface cracks.
(Image: © G. Di Achille)

The seas and lakes thought to havefilled the basins ofancient Mars could have emerged from cracks in the ground, scientistsnowsuggest.

Although Mars is cold and dry today,wateris thought to have coveredmuch of the Red Planet in the distant past.This could explain, for instance, why the northern lowlands holdextensivesedimentary deposits that resemble those seen in the abyssal plains ofEarth'socean floors.

The origin of these deposits iscontroversial. One theorysuggests ancientMars' oceans formed after huge volumes of water and sedimentwere suddenlyreleased from zones of collapsed crust known as chaotic terrains.However,these zones of collapse are rare on Mars on the whole, while the plainsdeposits are widespread.

"Inaddition, our modelindicates this could have happened at any point in the planet'shistory,"said J. Alexis Palmero Rodriguez at the Planetary Science Institute inTucson,Ariz. "There could have been many oceans on Mars over time."

"Someplateaus may haveavoided this fate and preserved sedimentary plains containing animmense recordof hydrologic activity," Rodriguez added. "The geologic record in thecollapsed hilly regions would have been jumbled and largely lost."

Thesenew findings could shedlight on the nature of any seas that once covered Mars. It remainsuncertain,for instance, whether they would have been warm orcold.

Also,if lifeexisted underground on Mars,these discharges ofwater could have brought it up to the surface. Organisms and theirfossils maytherefore be preserved within some of these sedimentary deposits,Rodriguezsaid.

Rodriguezand his colleagues willdetail their findings in the November issue of the journal Icarus.