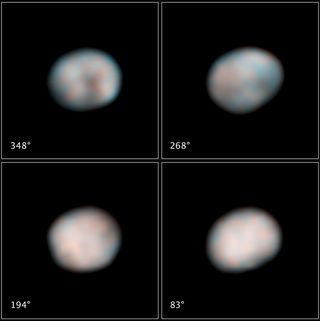 NASA's Hubble Space Telescope snapped these images of the asteroid Vesta in preparation for the Dawn spacecraft's visit in 2011. Each of the four Hubble images captures views of Vesta during its 5.34-hour rotation period.
(Image: © NASA/ESA/STScI/UMd)

New views of the second-biggest asteroid in the solar system are giving astronomers a better sense of how the object spins — information that will come in handy when a NASA spacecraft arrives at the space rock July 2011.

The images, taken by the Hubble Space Telescope, show the asteroid Vesta, a large space rock in the asteroid belt located between the orbits of Mars and Jupiter.

NASA researchers combined 216 new photos into a video of Vesta as it rotates once every 5.34 hours.

The images show that Vesta has a tilt of approximately 4 degrees more to the asteroid's east than scientists previously thought. The data, researchers said, will help NASA plan the arrival of the unmanned Dawn spacecraft at Vesta next year.

"While Vesta is the brightest asteroid in the sky, its small size makes it difficult to image from Earth," said Dawn mission science team member Jian-Yang Li, of the University of Maryland in College Park, in a statement. "The new Hubble images give Dawn scientists a better sense of how Vesta is spinning, because our new views are 90 degrees different from our previous images. It's like having a street-level view and adding a view from an airplane overhead."

The new spin and tilt information suggest that seasonal conditions in Vesta's southern and northern hemispheres may take place about a month later than previously expected when Dawn is orbiting.

The asteroid Vesta is about 329 miles (529 km) wide and second in size only to Ceres, a huge space rock in the asteroid belt that is so large it qualifies as a dwarf planet. The Dawn spacecraft will visit both asteroids, starting with Vesta, to get close-up look at the huge rocks.

The goal of Dawn's mission is to take images of the entire surface of the asteroid and to measure the elevation over most of the surface to an accuracy of about 33 feet (10 m), or the height of a three-story building.

Knowing about the extra tilt is important because it affects the pattern of sunlight Vesta will receive.

"The new results give us food for thought as we make our way toward Vesta," said Christopher Russell, Dawn's principal investigator at UCLA. "We need to pay close attention to the solar illumination. It looks as if Vesta is going to have a late northern spring next year, or at least later than we planned."

The new analysis was detailed in a recent online edition of the journal Icarus.

Closing in on Vesta

The spacecraft will enter polar orbit around the 330-mile (531-km) wide Vesta and stay there until May 2012 before moving on to the Texas-sized Ceres, which it should reach by February 2015.

Vesta and Ceres are the most massive objects in the main asteroid belt between Mars and Jupiter. Spherical Ceres is the only asteroid large enough to be considered a dwarf planet, making Dawn the first mission to a dwarf planet.

Scientists study these celestial bodies as examples of the building blocks of terrestrial planets like Earth. NASA also expects that close examinations of space rocks will help the agency plan its next mission of sending astronauts to visit an asteroid by 2025.