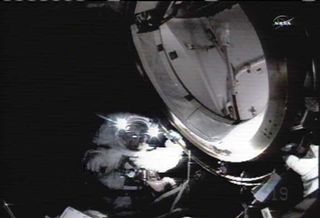 Two spacewalking astronauts ventured outside the International Space Station Monday on another big repair job to install a vital new pump and restore their ailing cooling system back to full strength for the first time in two weeks.

It is the third of four repair spacewalks for NASA astronauts Douglas Wheelock and Tracy Caldwell Dyson, who plan to spend at least 6 1/2 hours installing the new ammonia coolant pump. The astronauts removed a faulty pump during an earlier spacewalk on Aug. 11.

The space station's cooling system has been running at half strength since July 31, when an electrical short shut down one of two pumps that move liquid ammonia through the system. The failure forced astronauts to turn off some experiments and systems, as well as leave others without backups, in order to prevent the station from overheating.

The astronauts swiftly tackled their first chore: removing the new pump from a spare parts platform on the station's exterior.

"You know, when you're on the [spare parts platform] looking down at the Earth like this, it's like extreme hang gliding," Caldwell Dyson said.

One of four bolts securing the pump in place gave Wheelock some trouble when it refused to budge, but some extra elbow grease and tools did the trick.

Space station managers hope Wheelock and Caldwell Dyson will be able to completely hook up the new pump during Monday's spacewalk. The astronauts removed the faulty ammonia pump over two previous spacewalks (on Aug. 7 and Aug. 11) and are expected to install to perform a fourth spacewalk to move the disabled pump to its final storage location.

Mike Suffredini, NASA's space station program manager, said Monday's spacewalk — or extravehicular activity in NASA parlance — would go as long as possible to complete as much work as possible.

"The EVA will be as long as the consumables will allow," Suffredini said last week. "We'll take all the time we can get because we won't be done."

There are two main cooling system loops — Loop A and Loop B. The failed pump is in Loop A, while the other cooling loop remains operational. It was delivered to the space station in 2002, but wasn't activated until 2006.

NASA station managers have said the ammonia pump failure has been one of the most challenging repairs for the International Space Station ever attempted. The cooling system is so critical to station operations that a pump repair is one of 14 major failures for which NASA engineers have prepared emergency plans for in advance, they added.

The $100 billion International Space Station is currently home to six astronauts; three Americans and three Russians. Spare parts are key concern since the station is slated to keep flying through at least 2020. NASA plans to fly two more shuttle missions (in November and February 2011) before retiring its three remaining space shuttles for good. A potential third shuttle flight, which would launch next summer if approved, is also under discussion in Congress.

Once the space shuttle fleet is retired, NASA will rely on spacecraft from Russian to launch crews and cargo to the space station until American-built commercial spaceships or new government vehicles become available. Unmanned cargo ships built by the Japanese and European space agencies are also expected to keep the station stocked with supplies.