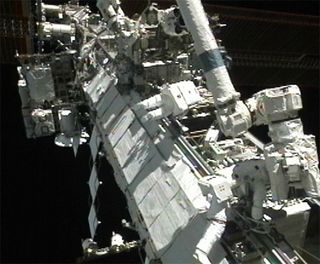 Astronauts on the International Space Station will have to perform a third unplanned spacewalk beyond two already set to replace a broken cooling system pump after an ammonia leak stalled their first repair attempt, NASA officials said Saturday.

It was the first of two unplanned repair spacewalks, known at NASA as extravehicular activities (EVAs), which station managers originally expected to be needed to finish the repair. And it was hard going for the astronauts.

First a stuck ammonia hose delayed their attempts to remove the broken pump. Wheelock used a tool like a hammer to bang it loose and was confronted with a substantial liquid ammonia leak. Mission Control told the spacewalkers to reconnect the ammonia hose and pack it up for the day.

The next spacewalk is slated for no earlier than Wednesday, but engineers are still trying to decide what to do. The faulty pump cannot be replaced until the leaky hose can be removed. And NASA wants to make sure the ammonia leak is contained or addressed before removing the hose.

The International Space Station uses liquid ammonia to cool its onboard systems by transporting waste heat to a network of radiators mounted to its main truss. There are two main cooling system loops — Loop A and Loop B. The failed pump is in Loop A, while the other cooling loop remains operational.

The space station has a finite supply of liquid ammonia and any leaks can also pose a risk to astronauts if the toxic coolant manages to find its way inside the orbiting laboratory. If astronauts encounter ammonia flakes during spacewalks, they go through lengthy decontamination procedures before returning inside.

Space station managers said they were disappointed that Saturday's spacewalk did not make much progress in replacing the pump. But the station is currently in a stable condition and its crew is in no danger.

Still, with many systems being switched off or running without backups to prevent the space station from overheating, NASA engineers hope to be able to complete repairs soon.

"We're not in a good configuration for station systems in terms of redundancy," space station flight director Courtenay McMillan said. " We have to get out of this [configuration] as quick as we can."

Mission planners are also taking care not to exhaust the space station crew, which has been completely focused on preparing for the repair spacewalks, McMillan said.

The space station is home to six astronauts; three Americans and three Russians.

The ammonia pump failed July 31, knocking out half of the space station's cooling system and forcing astronauts to turn off some experiments and systems, as well as leave others without backups, in order to prevent the station from overheating. A tripped circuit breaker, likely caused by a power spike, caused the malfunction, station managers have said.

Space station managers have said the pump malfunction is a major failure for the 12-year-old orbiting lab, enough so that engineers had already drawn up repair plans on the off chance it occurred.

The failed ammonia pump is located on the station's right side truss and will be replaced with one of four spare pumps stored at the orbiting lab.

Wheelock and Caldwell Dyson were initially slated to perform a different spacewalk on Thursday to prepare the space station for future construction work. Those tasks have been postponed.

Saturday's spacewalk marked the first for Caldwell Dyson and the fourth for Wheelock.