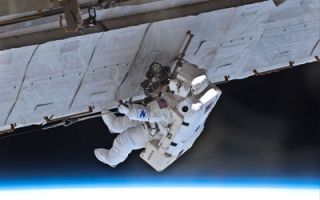 Two shuttle Atlantis astronauts are floating outside theInternational Space Station Wednesday on a spacewalk to fix a snagged cable ontheir spacecraft and install new solar array batteries on the orbitinglaboratory.

Mission specialists Michael Good and Stephen Bowen aremaking the excursion, which should last about seven hours. It is the second ofthree spacewalks scheduled for Atlantis' 12-day STS-132mission, its last planned mission before the shuttle is retired.

The astronauts began the spacewalk at 6:38 a.m. EDT (1038GMT), about an hour earlier than previously planned, in order to squeeze in therepair of a snagged cable on a shuttle sensor system.

The six astronauts aboard spaceshuttle Atlantis woke this morning a little after 2:20 a.m. EDT (0620 GMT) tothe song "Start Me Up" by the Rolling Stones, played especially formission specialist Piers Sellers.

"We are awake, and ready for another day," heradioed down to Mission Control.

Atlantis astronauts discovered the cable issue when theytried to complete an inspection of their orbiter's heat shield Saturday, theirfirst full day in space after launchingFriday afternoon. The sensor camera normally used for the task wouldn'ttilt fully because one of its cables was pinched by another piece of hardwareon the shuttle. The astronauts were able to complete most of the scan using abackup camera.

Mission managers are hoping that 20 to 30 minutes of work byBowen at the start of Wednesday's spacewalk will free the cable and fix thecamera.

"That should restore that capability so that the cameraand its sensors are available to the orbiter as required," said leadstation flight director Emily Nelson during a Tuesday briefing.

Once the cable issue is resolved, the spacewalkers can moveon to the main goal of today's spacewalk, or extravehicular activity (EVA).

"EVA 2 really is dedicated to one thing and that?schanging out six batteries at the end of the port truss," Bowen said in apreflight interview. The batteries are located on the P6 truss area all way outon the left side of the station's backbone.

Shuttle Atlantiscarried up a set of six new batteries to replace the aging units currently onthe station. They have a design life of six-and-a-half years, but the onescurrently on the station have working even longer.

Good and Bowen will aim to swap out three on Wednesday, andGood and mission specialist Garrett Reisman will replace the last three on afollow-up spacewalk Friday.

The job is more complicated than it sounds, because eachbattery weighs a hefty 375 pounds (170 kg). They have a design life of 6 1/2years, but the ones currently on the station have working even longer.

"These aren?t double A's," Goodsaid. "These are big. They are about the size of a big suitcase,maybe two suitcases."

The work is part of a quest to outfit the space station withspares and backups so it can continue functioning in top shape after NASA'sspace shuttle fleet is retired later this year. While Russian Soyuz spacecraftwill continue ferrying astronauts up to the lab, and a group of unmannedvehicles will make cargo runs, none of them has the cargo-carrying capacity ofthe space shuttles with their massive payload bays.

NASA currently hopes to keep the space station runningthrough at least 2020, a decade after the shuttles are due to retire.

While the spacewalk is the main goal for Wednesday, some Atlantisastronauts have a full plate of other interior tasks to move equipment andoutfit the station.

"Meanwhile inside the station we're going to have abusy day as well," Nelson said.

The spaceflyers plan to carry out some robotic arm maneuversto relocate hardware around the outside of the station, and will complete otherstation maintenance tasks.

SPACE.com is providing complete coverage of Atlantis'STS-132 mission to the International Space Station with Senior Writer ClaraMoskowitz and Managing Editor Tariq Malik based in New York. Click here for shuttlemission updates and a link to NASA TV. Live spacewalk coverage begins at