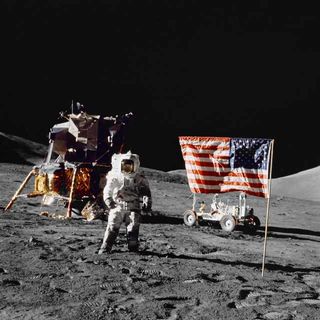 Apollo 17 astronauts pause for a photograph while exploring the moon. Their lunar lander and rover sit perched behind them.
(Image: © NASA.)

A former Apollo astronaut is upset with recent Congressionaltestimony by fellow space travelers ? including the first and last men to walkon the moon ? that derided President Barack Obama?s new space agenda.

On May 12, both Armstrong and Cernan told a Senate committeethat U.S. President?s Obama?s vision for space ? which aims to send humansto an asteroid by 2025, but would cancel NASA's most recent moon-orientedeffort ? is faulty, absent of details and is in need of proper review.

?I write this letter, as an Apollo astronaut, to state mystrong support for the proposed NASA space program as modified by PresidentObama,? Schweickart wrote in a May 16 letter to Sen. John D. Rockefeller, IV (D-WestVirginia), who chairs the U.S. Senate Committee on Commerce, Science &Transportation that hosted Armstrong and Cernan.

?With what I believe to be the coming loss of U.S. leadershipin human space exploration in mind, the question of how best to regain thatleadership breaks into two fundamental elements; our current situation and ourdirection going forward. In terms of relative importance I weigh these at80 percent and 20 percent respectively,? Schweickart writes in open testimony providedto SPACE.com by the former astronaut.

Schweickart has requested that Senator Rockefeller add hisletter to the testimony record of the May 12 hearing on the future of U.S.human space flight.

In February, President Obama unveiled a 2011 budget proposalfor NASA that, if approved, would cancel the agency's Constellation programdeveloping new Orion spacecraft and Ares rockets. Those vehicles were slated toreplace NASA's aging space shuttle fleet, which is due to retire this year afterthree final flights (one of which is under way today aboard the shuttleAtlantis).

On April 15, President Obama outlined a sweeping new space visionfor NASA that aims to send humans to visit a nearby asteroid and aim for Mars inthe 2030s. A heavy-lift rocket design ? vital for any interplanetary missions ?would be selected by 2015, Obama said.

Buzz Aldrin, Apollo 11 lunar module pilot and Armstrong'sfellow moonwalker, supports the plan. But Armstrong, Cernan and many lawmakers? among others ? have spoken out against its shift away from the moon and theConstellation, which NASA has spent more than $9 billion on since it began in2004.

Armstrong warned senators last week that the looming gapbetween the retirement of NASA's shuttle's this year and the rise of newcommercial spacecraft which NASA would seek out for flying astronaut risksceding U.S. dominance in human spaceflight over to other countries. "Othernations will surely step in where we have faltered," he said.

But Schweickart said a radical change is needed if the UnitedStates is to make any progress.

?Ourcurrent situation is akin to being on a dead end road,? he noted in his letter toSenator Rockefeller.

?Insteadof being on a path toward the goal we all seek, i.e. to regain our leadershipposition in human space exploration, we must recognize that we are (and havebeen) on a path to nowhere. We are confronted with arguments to ignore theclear signs of this sad situation and even encouraged to accelerate along thisfutile path,? Schweickart said.

Schweickartobserves that the alternative to this is support for President Obama?sproposed space agenda.

Fromthe former astronaut?s viewpoint, the Obama plan ?recognizes and eliminates thewaste of precious resources in the current program and heads us in a productivedirection toward our desired destination. In other words, when you recognizeyou are on a dead end road, stop, turn around, and head in a direction moreuseful to your goal.?

WhileArmstrong found utility in a return to the moon, as he expressedduring his recent Senate testimony, that view is not supported by Schweickart.

?Why,after 60 years, shouldwe be devoting incredible resources and effort to going back to the Mooninstead of to a challenging, pioneering new goal?? he said. "No oneis comfortable with the fact that we?ve gotten so far down the road on theConstellation program before realizing the depth of the hole we?re in. ?When ina hole? as the saying goes, first stop digging!?

Theright answer, according to Schweickart, is to ?stop, turn around, and figureout the best new path to regain our leadership in human spaceflight? and towardour agreed long term goal of the human exploration of Mars.?

That new path begins with the intermediate goal of to sendingastronauts on a mission into deep space, to a near-Earth asteroid, he added.

In Schweickart?s view, sending astronauts to explore anasteroid should actually be less expensive than a return to the moon?s surface.

?Thisis therefore, both an imaginative, new, and logical goal, and a natural step indeveloping the capability for the human explorationof Mars.Furthermore the public interest and support for U.S. astronauts exploringan asteroid, a new and very different ?world?, would be strong, Schweickartsaid.

As a well-versed advocate of dealing with Earth-threateningasteroids through his Association of Space Explorers affiliation, UnitedNations position papers, as well as the B612 Foundation ?a group dedicated tothwarting hazardous objects to our planet ? Schweickart points out that spacerocks occasionally threaten life on Earth as the result of an impact.

Furthermore, Schweickart suggests, they are fascinatingscientific objects, and they contain -- relative to the moon?s surface - awealth of valuable resources which may one day minimize the cost of spaceoperations.

In a related space matter, as addressed in last week?s Senatehearing, Schweickart said that without a commitment to a NASA shift inacquisition of launch services, the space agency and the U.S. Government ?willbe locked into developing and providing well understood transportation serviceswhich should rightly be relinquished to private enterprise.?

Schweickart said that ?NASA should, as proposed by the newspace program, continue to encourage and assist U.S. enterprise in meeting theperformance and safety requirements inherent in flying both cargo and people tolow Earth orbit without absorbing all of the cost. This cooperative effortwould both minimize the existing gap and bring into being an exciting, new USindustrial capability, replete with industrial innovation and job creation.?

However, Schweickart does concede that the endeavor ? ascritics have pointed out ? is a risky one.

?Of course it?s risky. All space activity is risky. Butwisely accepting and managing this risk will ultimately lead to a new andexciting U.S. business capability which will be the envy of the world,"Schweickart said. "The alternative is for NASA to continue to divert itsprecious human and economic capital to a challenging but very well understoodtransportation service rather than toward pioneering new and more advancedtechnology.?

LeonardDavid has been reporting on the space industry for more than five decades. Heis past editor-in-chief of the National Space Society's Ad Astra and Space Worldmagazines and has written for SPACE.com since 1999.