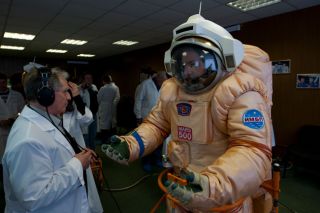 Testing a Martian version of the Russian-built Orlan spacesuit for the Mars 500 simulated missions to Mars. The suit has been modified for use in Earth gravity.
(Image: © ESA - S. Corvaja, 2010)

An 'astronaut' crew of two Europeans, three Russians andone Chinese citizen will walk into a fake spaceship and seal the hatch, butit?s no joke. The team is ready for a record-breaking Mars mission simulationthis summer and the European members are already set.

Europeans Romain Charles and DiegoUrbina have committed to spend almost a year and a half of their livesliving like Mars-bound astronauts as part of the Mars500experiment, the European Space Agency announced Monday.

The two Europeans and their crewmates will sealthemselves inside isolation modules set up at Russia?sInstitute of Biomedical Problems in Moscow. The mock spaceship also includes aninterplanetary vehicle, a Marslander and base, as well as an area carefully sculpted to simulate the redplanet?s landscape.

"I?m really excited and happy having thispossibility," said Urbina, reportedly with a big smile. "But ofcourse I also have mixed feelings and I?m slightly worried about the unexpectedthings, mainly psychological, that may happen during the isolation."

Urbina and Charles beat out two other European finalistsfor the privilege of making mock-space history. Urbina, 26, hasItalian-Colombian nationality and wide experience in the space field. Charles,31, from France, is a quality manager at Sotira, a company producing compositepanels.

Their confinement in the mock Mars ship could help determinethe human endurance breaking point when faced with living in close quarterswith strangers during a 520-day period of isolation, cut off from the rest ofthe world. Researchers in Europe and Russia will watch and record the crew's psychologicaland physiological signs throughout the experiment — not unlike a reality show,but hopefully with less of the drama.

Communication is restricted to e-mail and will undergooccasional disruption, just as a real Mars mission might experience due to solarstorms or other issues. The crew must also deal with as much as40 minutes of delay when transmitting back to Earth during the Marsoperational phase of the simulation.

"I am proud of these young men, who are not onlybrave enough to take part in this history-making experiment, but also who arewillingly giving so much their time for the benefit of spaceflight and futuregenerations," said Simonetta Di Pippo, director of human spaceflight forthe European Space Agency.

Phase two kicked off in March 2009, when six crewmembers managedto survive each other?s company for 105 days.