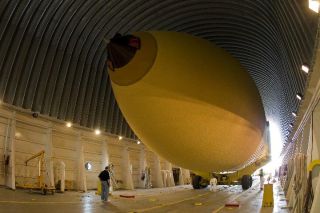 Space shuttle Discovery's external fuel tank, ET-137, is loaded into its Pegasus barge at the Michoud Assembly Facility in New Orleans for shipment to NASA's Kennedy Space Center. The planned 6-day delivery was hampered by a massive oil spill in the Gulf of Mexico, which forced NASA to hire a commercial tug for part of the journey. Full Story.
(Image: © Lockheed Martin)

WASHINGTON - The massive oil spill plaguing the UnitedStates Gulf Coast has also thrown a wrench in NASA's plans to deliver a hugespace shuttle fuel tank from Louisiana to Florida for the last launch ofshuttle Discovery in September.

The expandingoil slick has cut into the deep water route typically used by NASAbarges and their tugs to haul the 15-storey space shuttle fuel tanks from theirmanufacturing site ? the Michoud Assembly Facility in New Orleans ? to theKennedy Space Center in Florida to be attached to an orbiter for launch.

"It's kind of stuck in Gulfport, Mississippi rightnow because of the oil slick," Shannon told reporters in a morningbriefing. "They've had to take a different path with the barge and theFreedom Star cannot do that shallow-water course to Michoud."

The Gulf of Mexico oil spill was caused by the April 20explosion on the Deepwater Horizon oil rig operated by British Petroleum. As ofApril 28, the resulting oil slick was estimated to have a circumference ofabout 600 miles (970 km), though the shape of the spill is irregular. The slickis enormous, and is big enough to be seenfrom space.

NASA is working with commercial ship operators to haulthe Pegasus barge containing Discovery's fuel tank, called External Tank 137(ET-137) from Michoud to the waiting Freedom Star in Gulfport, which will takeover for the final trip to the Kennedy Space Center. The actual delivery workis expected to begin tonight, Shannon said.

It should take about six days for the fuel tank to makethe 900-mile (1,450-km) trip, Michoud officials added.

Space shuttle fuel tanks are built by Lockheed Martin andare too large to be delivered by train or truck. When fully fueled at thelaunch pad, they weigh about 1.7 million pounds (771,000 kg), counting the535,000 gallons of cryogenic liquid hydrogen and liquid oxygen propellant.

That mission, called STS-133, is slated to launch towardthe International Space Station on Sept. 16, but could slip slightly to allowextra time to prepare new spare parts for the nearly complete orbitinglaboratory.

Discovery's STS-133 mission Is NASA's the second-to-lastshuttle flight planned before the shuttlefleet retires in the fall.? The spaceshuttle Endeavour will launch on the final mission, called STS-134, no earlierthan Nov. 26 to deliver the $1.5 billion Alpha Magnetic Spectrometer to thespace station.

NASA's third space shuttle, Atlantis, is currently ontarget to launch its own final mission ? STS-132 ? on May 14. That flight isaimed at delivering a new Russian science module to the International SpaceStation.

It will be the first time in 15 years a Russian spaceroom has flown on an American space shuttle. The last time was in 1995, whenNASA delivered a new module to the Russian space station Mir.

Atlantis is due to fly a 12-day mission to theInternational Space Station to deliver the new Russian room. Three spacewalksare planned to install the module, replace solar array batteries and delivermuch-needed spare parts.