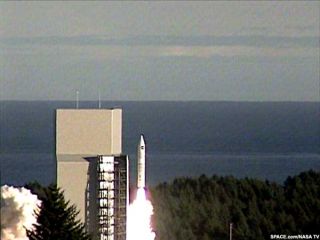 An Athena 1 rocket blasts off from the Kodiak Space Launch Complex in Alaska on Sept. 29, 2001 carrying satellites for NASA and the U.S. Air Force.
(Image: © NASA TV)

WASHINGTON -Lockheed Martin and Alliant Techsystems (ATK) will attempt to resurrect thelong-dormant Athena series of small-satellite launchers under an arrangementannounced by the companies Thursday.

The upgradedAthena 1c and Athena2c rockets will feature the same Castor 120 solid rocket motors as theirpredecessors, but use the newly developed Castor 30 motor for their upperstage, the companies said in a written announcement. The original Athenavehicles used the Orbus 21D motor built by the former Chemical Systems Divisionof United Technologies Corp.

The newAthena vehicles will be used to launch payloads weighing up to 3,775 pounds (1,712kg) into low Earth orbit and could be available for launches starting in 2012, ATKand Lockheed officials said in a statement.

The rocketscan be launched from several spaceports in the United States, including theCape Canaveral Air Force Station in Florida, KodiakLaunch Complex in Alaska, Vandenberg Air Force Base in California and theWallops Mid-Atlantic Regional Spaceport on Wallops Island in Virginia.

LockheedMartin Space Systems of Denver developed the original Athena 1 and Athena 2rockets in the 1990s to launch small payloads for government and commercialcustomers. However, the market did not materialize as expected and the companystopped offering the vehicles in the early part of the next decade.

The Athenarockets flew seven times, with two failures. Among the successes was theDecember 1998 launch of NASA?s LunarProspector mission aboard the three-stage Athena 2 rocket.

ATK SpaceSystems of Magna, Utah, will be responsible for providing the motors for theupgraded Athena vehicles, along with other structures, integration and support.The solid-fueled Castor 30 was developed for Orbital Sciences Corp.?s planned Taurus2 medium-class rocket and has been tested on the ground, the press releasesaid. The Castor 120 has been used on Dulles, Va.-based Orbital?s Taurus 1rocket in addition to the original Athena line.

LockheedMartin will be responsible for mission management, payload integration andlaunch operations of the Athena vehicles, the company said in an announcement.

Athena?starget market is currently served by Orbital with its Pegasus, Taurus 1 andMinotaur family of vehicles, and by Space Exploration Technologies Corp. of Hawthorne,Calif., with its Falcon1E rocket.

?The newAthena family will fill an industry need for lift capability in this payloadrange,? Scott Lehr, vice president and general manager of strategic andcommercial systems at ATK Aerospace Systems, said in a statement.