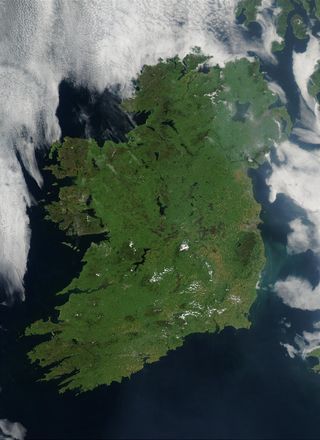 On August 7, 2003, the NASA Aqua MODIS instrument acquired this image of Ireland on the first day that summer that most of the island wasn't completely obscured by cloud cover.
(Image: © Jeff Schmaltz, MODIS Rapid Response Team, NASA/GSFC)

The views, taken by NASA's Aqua satellite and otherspacecraft, reveal Ireland as a verdant island covered in bright greenvegetation. Ribbons of blue-green phytoplankton can be seen faintly in theCeltic Sea just off the island's coast and south of Dublin.

Another viewof Dublin, this one taken in 1994 using a radar instrument on NASA's spaceshuttle Endeavour and also released today, shows a close-up on the city and itsnatural harbor. The divisions between rural and urban areas are clearly visiblein the false-color radar image.