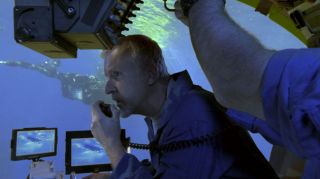 The maker of legendary movies "Titanic," "Aliens" and "The Terminator" is no longer limiting his zest for extracurricular exploration to the depths of the ocean.

Nowadays, James Cameron is spending more of his "spare" time involved in NASA's bid to send human explorers deeper into the solar system.

He's always been a space nut. He says he cried when, at 15 years old, he watched shuttle Columbia launch for the first time. He cried again the first time he saw -- in person -- a shuttle blast off from Kennedy Space Center, and felt the vibrations of the sound wave slam into his chest and move right through him.

Now, however, he's not just dreaming and watching from the sidelines. He's trying to help.

Two years ago, not long after the Columbia accident claimed the lives of seven astronauts, Cameron attended his first meeting as a member of the NASA Advisory Council, a body that counsels the agency's administrator.

Slowly, he became more engaged. Now, he's working as an investigator on a camera for a Mars mission set for this decade.

In a talk to NASA and contractor engineers and managers last week in Orlando, Cameron cautioned them to make good on the opportunity President Bush has given them with a new mission to send humans back to the moon and on to Mars.

"We so desperately need not to blow it," Cameron said of the first opportunity in decades to consider moving human exploration beyond low Earth orbit.

Cameron lamented that space exploration stalled -- because of political compromises -- after the Apollo moon landings. He said rather than being a jumping off point to future great adventures, the space shuttle and International Space Station ultimately "formed a closed-loop ecosystem for self-justification."

Now, the agency has a chance to move beyond that and chase mankind's "greatest adventure" -- landing humans on Mars.

But, Cameron cautioned, that is not going to happen without the public's buy-in.

First, he told the space community to keep the missions affordable. He said that while rockets don't burn fuel, they burn money.

"Where does the money come from? From working people, with mortgages and kids who need braces. Why do they give the money? Because they share the dream."

They need reasons to stay engaged: from telling them the ways space exploration has provided them with tools that improve their daily lives to helping them to be more interactively involved in the missions.

Most notably, Cameron said NASA does not do a great job telling its story. The focus is on hardware instead of people, partly because the agency shields its people from the public. Instead, in an era when American kids and adults need inspiration, NASA needs to do a better job of selling its astronauts and scientists as people.

"Our children live in a world without heroes," he said. "Your kids need something to dream about. We need this challenge to bring us together."