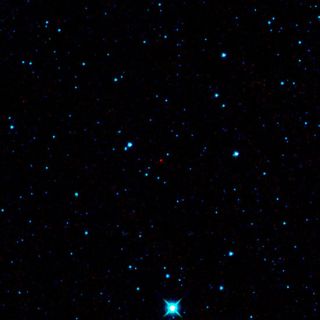 The red dot at the center of this image is the first near-Earth asteroid discovered by NASA's Wide-Field Infrared Survey Explorer, or WISE. The asteroid appears redder than the rest of the background stars because it is cooler and emits most of its light at longer infrared wavelengths. In visible light, this space rock is very faint and difficult to see.
(Image: © NASA/JPL-Caltech/UCLA)

NASA's latest sky-mapping space telescope has found anasteroid never-before-seen from Earth, the first of hundreds of new objects thetelescope is expected to find.

The newfound asteroid is currently about 98 million miles(158 million km) from Earth and has an estimated diameter of 0.6 miles (1 km).

The rock comes as close to the sun as Earth does, butbecause it circles the sun in an elliptical orbit tilted with respect to theEarth's orbital plane, the asteroid isn't thought to come near enough to ourplanet to pose a hazard. Scientists will monitor the asteroid though to makesure it doesn't pose an impact threat.

The WISE mission's software was able to pick out theobject moving against a background of stationary stars. Researchers confirmedthe object's identity with the University of Hawaii's 2.2-meter visible-lighttelescope near the summit of Mauna Kea.

WISE is expected to find about 100 to 1,000 previouslyundiscovered asteroids in the belt between Mars and Jupiter, as well as hundredsof new near-Earth asteroids during its all-sky survey, which began on Jan. 14.

A newreport issued last week found that NASA's efforts at findingnear-Earth asteroids that could potentially pose a threat to Earth are notsufficient.

NASA's asteroid and near-Earth object experts have saidthat the agency has found about 85 percent of the largest nearby asteroids,ones that are a half-mile (1 km) wide or larger. But only 15 percent of the460-foot wide asteroids near Earth have been discovered and tracked to date,and just 5 percent of nearby space rocks about 164 feet (50 meters) across havebeen found.

WISE will also spot millions of new stars and galaxies asit scans the sky in the infraredwavelengths every 11 seconds as it orbits the Earth. Thespacecraft launched from Vandenberg Air Force Base in California in December2009.