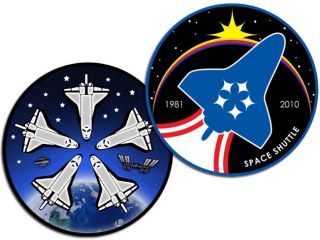 Two months ago, NASA put out the call to its past andpresent employees: design a patch to symbolize the end of the space shuttleprogram coming to a close in 2010, and the chosen artwork will fly to orbit onone of the final flights.

Its in-house patchcontest now over ? the deadline for designs expiring Tuesday ? the spaceagency is sorting through the nearly 100 entriesit received, including some offered by those who rode on the shuttles to space.

"Entries came from astronauts," revealed DebbieByerly, who led the patch contest as technical assistant to shuttle programmanager John Shannon, adding they also came from other former and current NASAemployees and from the agency's contractor workforce.

Among the latter category of entrants was Jen Scheer, asenior aerospace technician who works for United Space Alliance at the KennedySpace Center, where the shuttles launch and often land in Florida.

Scheer, who founded and runs the Space Tweep Society, anonline group for space enthusiasts on Twitter, shared her design through thesocial networking site.

"In case you're interested, this was my entry,"she wrote, adding a link to her computer graphic of a circular emblem with fiveshuttle orbiters in a star-like formation.

Scheer described her insignia and what it symbolized in ane-mailed reply to collectSPACE.com."The five orbiters represent Columbia, Challenger, Atlantis, Discovery,and Endeavour. The fourteen stars are to represent each of those who lost theirlives on shuttle missions, with one of the stars having six points like a Starof David, in honor of Israeli astronaut Ilan Ramon."

"Also shown is the Earth, because the shuttle alwaysremained in low Earth orbit," she continued. "Finally, two of theshuttle program's greatest accomplishments are represented -- the InternationalSpace Station and the Hubble Space Telescope."

In response to compliments she received through Twitter, Scheerwrote that she expected some "great designs" that her entry would"have to compete against."

"I'm sure there are lots of good ones," she wrote."[I] can't wait to see what others came up with."

One of Scheer's competitors is a shuttle flight controllerat Mission Control in Houston. The Johnson Space Center employee shared herdesign with collectSPACE.com but asked not to be identified.

"The shuttle program has been flying for so long anddone so many things that it's difficult to encapsulate theentire program on a single patch," the flight controller wrote.

"I used the silhouette of the orbiter because it issuch an iconic shape, recognizable to people all over the world. The crescent Earthdepicts a similarly iconic view from orbit, while the sun can be interpretedboth as setting at the end of the successful shuttle program and rising on thenew programs in NASA's future."

"The five stars centered on the orbiter represent thefive orbiters that have flown in space over the history of the program,"her description continued. "These are located over the payload bay to alsorepresent the hundreds of payloads and missions that the shuttle has supported,from experiments to satellites to space station dockings."

"Finally, the stars in the [patch's] backgroundrepresent the thousands of people who have supported the space shuttle programover the past 29 years," she concluded.

Some of those thousands will soon have their chance toidentify which of the proposed patches is their favorite.

"The [designs] will now be reviewed and judged by ateam of space shuttle program managers from various centers, who will providerecommendations for the patch," Byerly wrote to collectSPACE.com.

All of the entries will then be posted to a NASA internalsite in January where "employees will be able to choose their favoritefrom among the finalists for a People's Choice Award. The number of votesreceived will be one of the factors in the judges' final decision," saidByerly.

The winning design will be flown on an upcoming shuttlemission, and the winner will be presented with their flown artwork as an award.NASA will also produce the patch to be shared with the public.

"I'm hoping I'll win and NASA will make themavailable!" exclaimed Scheer in a Twitter reply to a fan asking for herpatch. "If I don't [win], we'll see what we can do."

collectSPACE.comis working to soon host a public gallery of all the patch designs entered inNASA's contest.