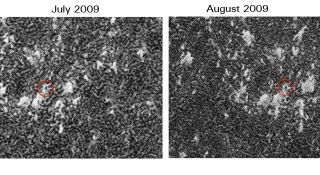 As the sun began to reappear on the horizon following the deepest, darkest days of north polar winter on Mars, the HiRISE camera imaged the Phoenix landing site on July 30, 2009, (left image) and in Aug. 22, 2009 (right). Carbon-dioxide frost covers the lander in both images but is thicker in the second one.
(Image: © NASA/JPL-Caltech/University of Arizona)

The long-defunct Phoenix Lander is covered in frost on the frozen Martian wasteland, as seen in new images taken from orbit.

The NASA lander stopped communicating a year ago after its successful mission.

The new images, taken a few weeks ago and released Wednesday, show the lander shrouded in frost made of carbon dioxide, what we call dry ice. It is barely distinguishable from the desolate winter landscape.

The images were taken with the HiRISE  camera on the space agency's Mars Reconnaissance Orbiter on July 30 and Aug. 22, when the sun began peeking over the horizon of the northern polar plains during winter. The first day of spring in the northern hemisphere began Oct. 26.

"We decided to try imaging the site despite the low light levels," said HiRISE team member Ingrid Spitale of the University of Arizona Lunar and Planetary Laboratory.

The HiRISE (High Resolution Imaging Science Experiment) team targeted their camera at the known location of the lander to get the new images and compared them to a HiRISE image of the frost-free lander taken in June 2008. That enabled them to identify the hardware disguised by frost, despite the fact that their views were hindered by poor lighting and by atmospheric haze, which often obscures the surface at this location and season.

Brightness doesn't necessarily indicate the amount of frost seen in the images because of the way the images are processed to produce optimal contrast. Even the darker areas in the frost-covered images are still brighter than typical soil that surrounds the lander in frost-free images taken during the lander's prime mission in 2008.

Other factors that affect the relative brightness include the size of the individual grains of carbon dioxide ice, the amount of dust mixed with the ice, the amount of sunlight hitting the surface and different lighting angles and slopes, scientists said.

Studying these changes will help us understand the nature of the seasonal frost and winter weather patterns in this area of Mars.

During the first quarter of 2010, teams at NASA's Jet Propulsion Laboratory will listen to see if Phoenix is still able to communicate with Earth. Communication is not expected and is considered highly unlikely following the extended period of frost on the lander.