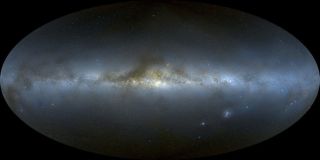 Axel Mellinger, of Central Michigan University, created this panorama of the Milky Way from 3,000 individual photographs that he melded together with mathematical models.
(Image: © Dr. Axel Mellinger)

A new panoramic image of the full night sky ? with the MilkyWay as its centerpiece ? has been made by piecing together 3,000 individualphotographs.

To combine these images, a simple cutting and pasting jobwould not suffice. Each photograph is a two-dimensional projection of the celestialsphere. As such, each one contains distortions, in much the same way thatflat maps of the round Earth are distorted. In order for the images to fittogether seamlessly, those distortions had to be accounted for. To do that,Mellinger used a mathematical model ? and hundreds of hours in front of acomputer.

Another problem he had to deal with was the differingbackground light in each photograph.

"Due to artificiallight pollution, natural air glow, as well as sunlight scattered by dust inour solar system, it is virtually impossible to take a wide-field astronomicalphotograph that has a perfectly uniform background," Mellinger said.

To fix this, Mellinger used data from the Pioneer 10 and 11space probes. The data allowed him to distinguish star light from unwantedbackground light. He could then edit out the varying background light in eachphotograph and fit them together so that they wouldn't look patchy.

Mellinger describes the image-making process in the Novemberissue of the journal Publications of the Astronomical Society of the Pacific.

The result is an image of our home galaxy that no star-gazercould ever see from a single spot on earth. Mellinger plans to make the giant648 megapixel image available to planetariums around the world.