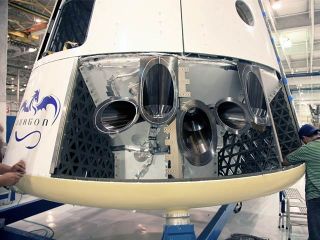 The Dragon qualification unit being outfitted with test Draco thruster housings. Depending on mission requirements, Dragon will carry as many as eighteen Draco thrusters per capsule.
(Image: © SpaceX)

WASHINGTON? Space Exploration Technologies (SpaceX) Corp. said Thursdaythat it will launch a prototype of its reusable Dragon cargo capsule on themaiden flight of the Falcon 9 rocket the Hawthorne, Calif.-based company stillhopes to conduct this year.

?Theinitial test flight will carry our Dragon spacecraft qualification unit ?providing us with valuable aerodynamic and performance data for the Falcon 9configuration that will fly on the following [Commercial Orbital TransportationServices] and [Commercial Resupply Services] missionsfor NASA,? SpaceX announced in an update sent tomedia.

Dragon is areusablecapsule SpaceX has been developing under NASA?sCommercial Orbital Transportation Services (COTS) program since 2006 to carrycargo to the international space station. In December, SpaceXwon a $1.6 billion NASA Commercial Resupply Servicescontract to conduct 12 cargo flights to the station by the end of 2016.

SpaceXsaid in 2005 that it had sold Falcon 9?s inaugural launch to a U.S. government customerit was not permitted to name, prompting speculation that the customer is anintelligence agency since the U.S. Air Force publicly announces launchcontracts even when the payloads are classified.

Falcon 9?sdebut was supposed to have happened in 2007, but development of the rocket andits smaller sibling, the Falcon 1, has taken longer than planned.

In itsSept. 24 update, SpaceX said Falcon 9?s upcomingdebut is still considered a test flight and will not count as one of three Dragondemonstration flights it is obliged to fly under its $278 million COTSagreement with NASA. That agreement called for SpaceXto conduct Dragon?s first flight in September 2008 and conclude thethree-flight demonstration program one year later with a flight to the internationalspace station.

SpaceXsaid it expects to have the first Falcon 9 fully assembled on its pad at CapeCanaveral Air Force Station, Fla., in November, but cautioned that the actuallaunch may not occur until three months later.

?The actuallaunch date will depend on a variety of factors, including weather and the overalllaunch schedule at the Cape, so that is a little harder to predict,? SpaceX said. ?Based on prior experience, launch could beanywhere from one to three months after Falcon 9 is integrated at the Cape inNovember.?

Falcon 9launch preparations are taking place as the White House and NASA mull over therecommendations of an expert panel that called for relying on the commercialsector ? meaning companies like SpaceX ? to transportcargo and astronauts to low Earth orbit.

SpaceXdesigned Dragon from the beginning to be able to accommodate astronaut crews,even going so far as to include windows on a vehicle that will debut as a cargotug. SpaceX says the Dragon can be made ready tocarry astronauts within three years of the time it receives the necessaryfunding.

NASA so farhas committed $50 million to a so-called Commercial Crew Development programthat seeks to accelerate the development of commercial human spacetransportation systems. Proposals for that money were due Sept. 22. NASAexpects to make one or more awards in November. SpaceXwas one of roughly two dozen companies that had told NASA by early Septemberthey intended to go after the money.